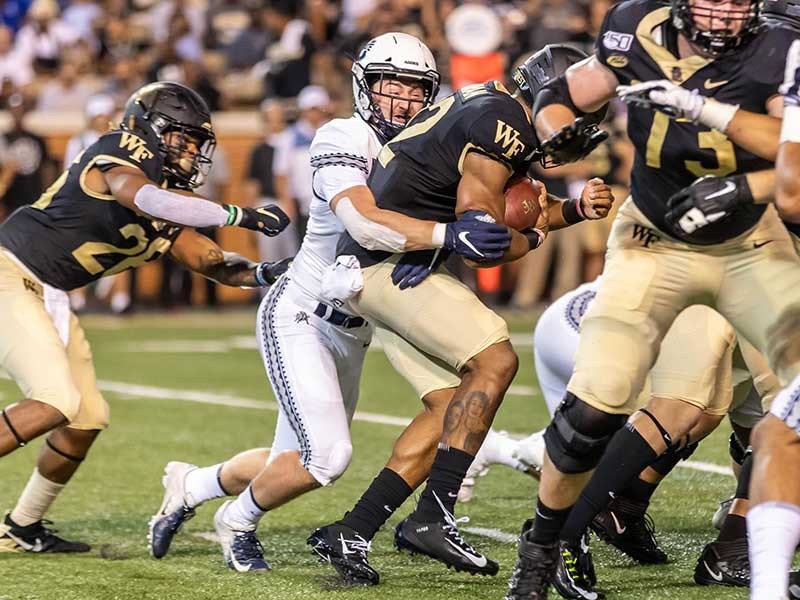 Utah State junior linebacker David Woodward was named the America First Credit Union USU Student-Athlete of the Week for the period ending on Sunday, Sept. 1, it was announced Monday. The award is voted on by a state-wide media panel.

It is the first time this year and second time in his career that Woodward has been named USU's student-athlete of the week. With their sponsorship of the Student-Athlete of the Week, America First Credit Union donates funds directly to support student-athlete scholarships.

Utah State will open the home portion of its schedule on Saturday, Sept. 7, against Stony Brook at 5:30 p.m., on Merlin Olsen Field at Maverik Stadium. The Seawolves, who are members of the Colonial Athletic Association (CAA) and compete in the Football Championship Subdivision (FCS), opened their season with a 35-10 victory over Bryant on Thursday.

Nominees from other sports for USU Student-Athlete of the Week included:

MEN'S CROSS COUNTRY – Senior J.D. Thorne (Mendon, Utah) finished first among Aggie men in the 7-kilometer run and second overall with time of 21:50.34 at the USU-hosted Sagebrush Invitational. This is the second-straight season Thorne finished first among Aggie competitors as he earned first-place honors at last year's Sagebrush Invitational. Thorne led Utah State to a first-place team finish with 22 points, finishing ahead of Boise State (39 points).

WOMEN'S CROSS COUNTRY – Junior Katie Struthers-Haviland (Lehi, Utah) finished first among Aggie women competitors in the 5-kilometer run, and second overall, with a time of 18:29.40 at the USU-hosted Sagebrush Invitational. Struthers-Haviland led the Aggie women to the team title with 25 points, finishing ahead of Mountain West-rivals Boise State (34 points) and UNLV (75 points).