Utah State University’s Energy Lab is participating in a federal grant to develop bio jet fuel for the nation’s single largest user of oil, the U.S. Department of Defense (DOD).
The Defense Advanced Research Projects Agency (DARPA), the Pentagon’s R&D funding agency, recently announced the award of a research and development contract to General Atomics, a defense contractor and system integrator based in San Diego. As a member of the General Atomics team, USU received $500,000. The USU team is led by Energy Lab executive director Jeff Muhs.

Under the General Atomics grant, the lab will conduct key research and provide specific technical contributions toward creating, within a three-year time frame, an algae-biofuel facility able to produce 50 million gallons of JP-8 grade biofuel on an annual basis. The project is particularly focused on the development of bio-jet fuel, to help the nation utilize domestic sources of energy rather than import oil from unstable regions of the world.

USU’s Energy Lab opened in 2007, thanks to funding through the Utah Science, Technology and Research (USTAR) initiative.
“Our competitive advantage is a unique configuration of high-tech optics to improve yield,” said Muhs. “Our team is in the process of filing a patent application on this novel photobioreactor design. We plan to have a working prototype later this year.”
USU President Stan L. Albrecht said the grant contributes to the state’s economy.
“A share of the grant monies will flow directly into our state’s economy,” Albrecht said. “The role of USU’s Biofuels team in the award of the General Atomics grant is evidence that Utah is seeing a return on the USTAR investment. With that investment, USU can attract and support the talent, leadership and creativity it takes to win additional R&D dollars.”
The General Atomics award follows a U.S. Department of Energy – Office of Biomass Programs award to Montana State University with USU as a participating institution, announced in September 2008. A $450,000 portion of that grant will be executed by USTAR hire Dr. Sridhar Viamajala, who is USU’s lead investigator.
The Montana State University project is focused on investigating extremophilic microalgae (such as found in the Great Salt Lake and Yellowstone National Park) for advanced lipid/biomass production.
According to industry studies, one acre of algae can produce 50 times the oil that one acre of corn can deliver.
“Obviously, with high gas and food prices, the market for a truly sustainable biofuel will be enormous,” said Charles Precourt, board member of the USTAR Governing Authority.  “And, algae can be grown in rural areas of Utah, where climate and soil conditions make growing traditional crops difficult at best. This is exactly the sort of statewide economic development, with large potential, that USTAR was created to foster.”
Contacts: 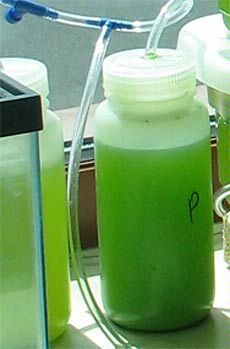