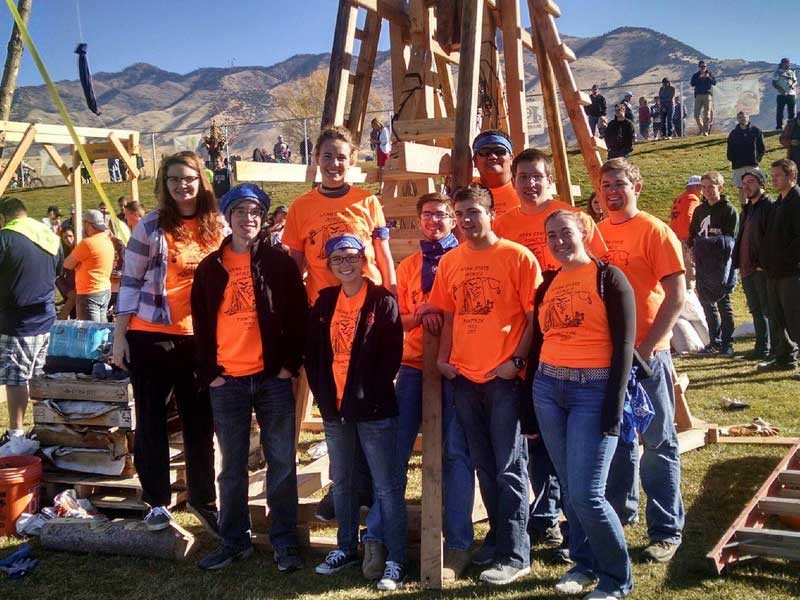 Daniel Bertrand and his trebuchet team show off their historical trebuchet during a demonstration in October 2017.

It stood as tall as a six-story building and could only be transported with a dozen-plus wagons. What’s more, this immobile war machine was effective at penetrating only a limited target range. A good day was the launch of a diseased dead animal that topped the ramparts and fell among the enemy troops.

Oh, and another thing: slivers.

But despite any warts or limitations, the trebuchet is an object of fascination for Utah State University history student Daniel Bertrand. And, based on the crowd of more than a 100 spectators who watched his 2017 demonstration, many more share that enchantment of history.

This weekend Bertrand and his trebuchet-building team will demonstrate an improved model, from 10 a.m. to noon on Saturday, Oct. 20. The location is an empty field in Benson, 4800 N. 2400 West. Signs will direct spectators. Audiences will witness the fate of pumpkins and bowling balls as they’re launched into the distance.

Bertrand, a self-described “super senior” who will graduate this spring, was first introduced to the trebuchet when he was a freshman in engineering and participated in an annual Pumpkin Toss.

But with the encouragement of Susan Cogan, a medievalist and assistant professor of history, Bertrand decided to “go back to the roots of the trebuchet — how they would have built it back then.”

Bertrand, 22 years old and a native of Taylorsville, Utah, was already into the Middle Ages’ “knights and swords and castles” when he changed his major to history. He eschews any romantic tales of chivalry, preferring “the action and politics of war” — specifically, “the High Middle Ages, before the black plague.”

We denizens of the 21st century “should know where we’ve been before we go into the future,” he said. “There are thousands of years of history, and it still has implications today. I guess you could ignore it, but I don’t want to.”

Bertrand’s trebuchet stands at 33 feet tall. Still, that’s only “half scale” of a medieval war trebuchet; such a machine would have reached 60 feet or more, he says.

This year’s working medieval trebuchet is the same size, but “we’re making it more heavy duty and adding more features,” he says. “It’s being improved -- but it’s not any bigger because I can’t afford” the increased cost.
The change this year is in the machine’s heft. An earlier trebuchet was “really skinny,” he says, “all screwed together with 2 x 4s, the cheapest thing we could put together.” It carried a counterweight of 300 pounds.

Indeed, counterweight is key, he says. The “physics rule of thumb” is to use a counterweight at least 30 times the weight of the missile. However, an effective trebuchet would have a 100-1 ratio, he said.

In theory, when the counterweight is dropped, the projectile arm rotates and whips the sling around, launching the payload. The reality is actually muddied by plenty of other mechanical details, such as the length of the throw arm and the angle of the pin that releases the sling. Some medieval warriors are said to have launched projectiles of up to a ton.

Earlier in Bertrand’s trebuchet journey, he used concrete-filled tires as counterweight. His has been a true test of the theory of “experimental archaeology,” in which practical tests on replicas can help determine how the machine was actually constructed. (Unfortunately, few schematic drawings remain — medieval commanders were better at killing than drafting.).

Bertrand and his team of about a half dozen enthusiasts now load sandbags into the giant counterweight basket; this allows them to more accurately calculate the counter-balance weight.
Instead of the nails and bolts used in previous versions, this year hand-fitted wood joinery holds the machine together. (OK, Bertrand admits, there may have been some use of power tools, as well as beams of dimensional lumber, rather than hewn-square tree trunks.)

Bertrand has traced the history of the trebuchet to its birthplace in China. The further west it spread, the more deadly it became. By the Middle Ages, the weapon had  showed up at battles around the world and was used historically by the Mongols, Crusaders and Persians.

The counterweight trebuchet is not an “anti-personnel” weapon, says Bertrand. Its primary purpose was to collapse castle walls or a city’s rampart. If an occasional diseased animal corpse or beehive landed among the city’s defenders, that was a bonus.

Trebuchet sometimes launched Greek fire, a deadly and horrifying oily mix of naptha and quicklime that can’t be doused with water.

The demonstration on Saturday will primarily feature pumpkins and a bowling ball. “It’s definitely a spectator sport,” says Bertrand, “but it’s awesome.”

Light refreshments will be served.

The event is followed up on Friday, Oct. 26, at 4 p.m. with a public panel discussion titled “Misconceptions of the Middle Ages.” Sponsored by the Logan Library and USU Department of History, panel members include Prof. Alexa Sand, an art historian, Robert Mueller, associate professor of history and Danielle Ross, assistant professor of history. Mueller is a specialist in medieval and early modern European history, while Ross researches central Asian history. They’ll explore such questions as the historical accuracy of Monty Python and other Hollywood types, as well as whether life in that era was “dirty, crooked and backwards.” 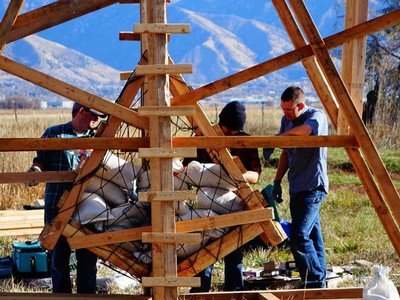 Daniel Bertrand (right) helps load the trebuchet basket with sandbags to use as a counterweight during the 2017 event. At left is Cody Patton, 2017 history graduate. 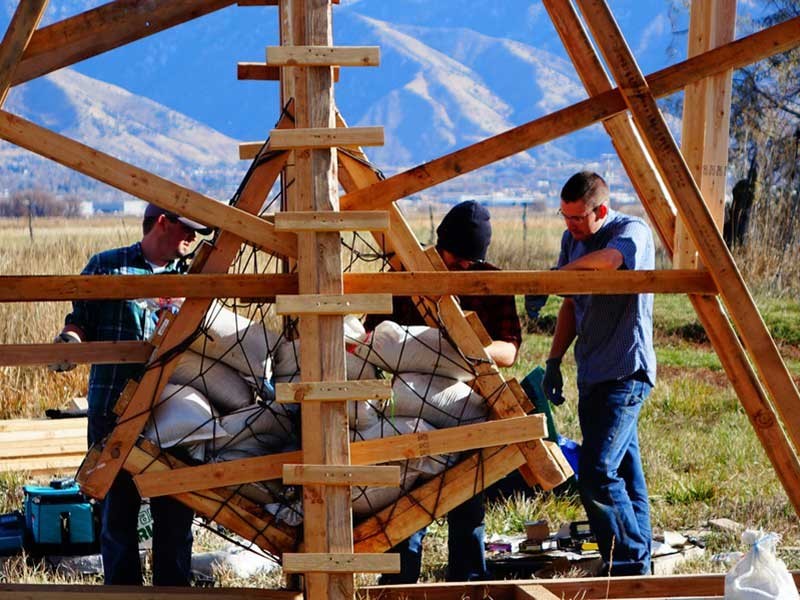