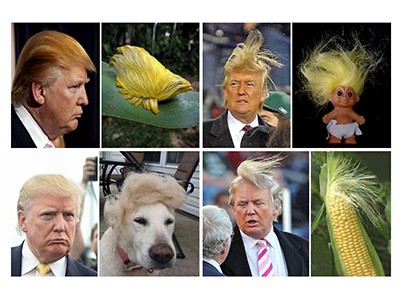 Researchers for USU's Digital Folklore Project announced the digital trends of the year in three categories: Social Issues, Fun that Matters and Animals. The winner in the category of Fun that Matters is the Twitter account, @TrumpsHair. This account boasts both praises of and memes mocking Trump’s comb-over flagrante.

This year’s winner in the Social Issues category is #LoveWins, which emerged in June as a response to the Supreme Court decision making same-sex marriage the law of the land. Around the world, people used this hashtag to celebrate marriage equality.

“Hashtags like #LoveWins show the impact of historic events on the lives of everyday people,” said USU Professor Jeannie B. Thomas, co-director of the Digital Folklore Project. Thomas co-directs the project with Lynne S. McNeill, also a professor of folklore at USU.

The winner in the category of Fun that Matters is the Twitter account, @TrumpsHair. This account boasts both praises of and memes mocking Trump’s comb-over flagrante. Popular memes include dogs, cats, guinea pigs and chickens with their hair styled like that of the Republican presidential contender.

“It's no surprise that in this season of pre-election posturing a digital trend would crop up that helps us all let off some steam,” McNeill said. “Trumping our cats and dogs may seem silly — and it may be more snarkily fun than politically useful — but pushing back with humor against the powers that direct so much of our attention in the media is an important form of vernacular expression.”

The #BrusselsLockdown cats took the honors as the digital animal of the year. This hashtag emerged in Belgium shortly after the Paris terrorist attacks. Police in Brussels asked citizens not to tweet about police activity in their neighborhoods because this information could aid the terrorists. People not only adhered to the request but also flooded Twitter with photos of cats to confuse and mock the terrorists.

Other 2015 finalists included the memes about refugees and terrorists, the cell phone video of the police shooting of Walter Scott, #MoreThanCute, the #ManBun, #TheDress, the Pizza Rat meme and #DeadRaccoonTO.

The digital trends that were recognized last year include #Black Lives Matter, #NotYourMascot and the ALS Ice Bucket Challenge.

A national panel of judges chooses the Digital Trend of the Year on the basis of several criteria including its cultural significance and the fact that it is folklore — that is, it either comes from the grassroots or is taken over by everyday people.

Questions should be directed to digitalfolkloreproject@gmail.com, or by telephone at 435.770.4695  or (435) 797-2733. Ideas for the next Digital Trend of the Year can be tweeted using the hashtag #DigitalTrendOfTheYear.