Palak Vasudeva, president of the ISA, said the holiday celebrates the victory of good over evil in Indian mythology. For many in her generation, the holiday is celebrated among friends and family.

“For youngsters, it’s all about getting together, having a night of cultural events and simply sitting and enjoying a warm evening,” Vasudeva said.

The night’s 14 performances included a variety of dance and vocal performances. Performers included USU students as well as other members of the Indian community.

The first half of the performances predominantly featured traditional Indian dance and song. Near the beginning of the evening, children from the Cache Valley Indian community performed the Ganesha Vandanam dance. Swathi Swaminathan, one of the hosts of the event, said the symbology of the dance was an invocation of the blessings of Ganesh, the Hindu god of wisdom.

The second half introduced more contemporary Indian performances with Bollywood karaoke, a rock concert and Bhangra, a style of music and dance combining Punjab and hip-hop influences.

Former ISA President Ashwin Kumar said the event was organized with the traditional performances first and the more contemporary presentations came in the second half. The latter performances were not only a mix of Indian and Western cultures, but a mix of modern and classical.

“The second half is pretty much us kids trying to have fun, and it’s just about us in America and having fun,” Kumar said.

Adam Frandsen, a USU alumnus who graduated in the spring, performed in the rock concert as a vocalist. Frandsen said he was approached to perform in Diwali through Indian friends he had met in his neighborhood. Frandsen said only one of the songs the band performed was American — Nirvana’s “Smells Like Teen Spirit” — and the rest were from India. He said despite the difference in language and culture, he felt pretty comfortable performing the songs.

“It didn’t really seem like a different language, because I had most of the lyrics explained to me in advance,” Frandsen said. “They’re actually really pretty similar in terms of content. Most of the songs are about the feel of rocking out, or something to do with love or relationships.”

Frandsen said the show was so high-energy, the drummer broke both his drum sticks during “Smells Like Teen Spirit.” Frandsen said Ahsish Raj, another band member, got two marriage proposals after the show because his performance was so scintillating.

Halfway through the night, USU Catering served a dinner of Indian dishes.

“It’s like being in India,” Jamwal said. “I feel the same environment.”

Jamwal said the food, the attire of the performers and many audience members, as well as the conversations in Indian languages all contributed to the event’s atmosphere. He said this is the third year he’s attended the celebration.

Throughout the night, competitions modeled after the game show “Minute to Win It” punctuated performances. Contestants stacked Oreo cookies on their foreheads, balanced chains of coat hangers and stacked pyramids of plastic cups to win gift certificates to sponsoring restaurants.

Event coordinators also collected donations for Charity Vision, a humanitarian organization that provides optical surgeries in 25 countries worldwide. Lee Robison, a representative of the organization, said cataract surgeries can be performed in Africa for as little as $25. 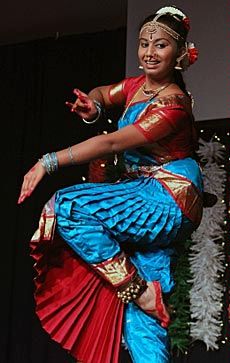 Dancer performs in this year's Diwali celebration Nov. 3 in the TSC Ballroom. (photo from the Utah Statesman Online)