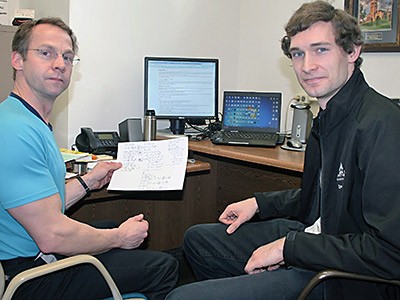 USU math major Ryan Wallentine, right, with his faculty mentor David Brown, is investigating use of a rule of evidence known as the 'Doctrine of Chances' in sexual assault cases. He presents at Undergrad Research Day on Utah’s Capitol Hill Jan. 26.

In early 1915, a bereaved British vicar read a newspaper report of a new bride drowning in a bathtub that was eerily similar to the demise of his beloved daughter just a year before. Sure enough, the vicar’s former son-in-law George Joseph Smith was the new victim’s groom. It turns out yet another bride of Smith drowned in a bathtub in 1912 and the thrice-widowed groom was the beneficiary of more than £3,700 — around $270,000 in today’s money.

Smith might have walked had it not been for the vigilant vicar, a suspicious landlady, a diligent detective and the persistent forensic scientist Bernard Spilsbury. The resulting trial ended with Smith sentenced to hanging and development of an English common law rule of evidence known as the Doctrine of Chances.

“The Doctrine of Chances is a rule of evidence allowing, under certain circumstances, evidence of past crimes, wrongs or acts that are ordinarily not admissible in a court of law,” says Utah State University math and history major Ryan Wallentine. “It’s used to show the unlikelihood a defendant would be repeatedly, and innocently, involved in similar, suspicious circumstances.”

With faculty mentor David Brown, associate professor in USU’s Department of Mathematics and Statistics, Wallentine is striving to determine a precise, probabilistic threshold to allow use of the Doctrine of Chances, also known as “DoC,” in sexual assault cases with the aim of permitting more evidence to be admissible when the defendant is a repeat offender.

An aspiring attorney, Wallentine presents his efforts Jan. 26, at Utah’s 2016 Undergraduate Research Day on Capitol Hill in Salt Lake City. The 2008 graduate of Mountain View High School in Boise, Idaho, is among about 30 Aggies selected to present posters to legislators and the public in the Capitol Rotunda.

“The conviction rate in sexual assault cases in Utah and throughout the United States is about three percent, which is dismally low,” says Wallentine, who’s spent months poring over data provided by USU’s Sexual Assault and Anti-Violence Information ‘SAAVI’ Office and the Rape, Abuse and Incest National Network.

“Factors ranging from social stigma to the legal system’s intimidating nature make it difficult for victims of sexual assault to follow through with prosecution,” he says. “Yet the crime is all too prevalent. According to FBI data, nearly one in five women and one in 71 men report experiencing rape at some time in their lives.”

Criminologists suspect a significant percentage of sex offenders are repeat offenders, Wallentine says, so the ability to apply the DoC could increase convictions.

To conduct the study, the USU undergrad employed a number of statistical and mathematical models, including Bayesian networks, the SIR (susceptible, infectious, recovered) model of disease transmission and dynamical systems.

“The DoC isn’t endowed with a clear threshold for its application but the spirit of the precedent clearly involves one,” Wallentine says. “This precedent must have set a probabilistic threshold, but what was it? And, more importantly, how can this mysterious calculation be applied to sexual assault cases analogous to the ‘Brides in the Bath’ murders?”

Wallentine says the discipline and precision he’s learned in studying math techniques is helping him with the research project and will likely benefit him with his future legal studies.

“Working through tough math classes has really trained me to watch for the small details,” he says. “Things you think are obvious are not obvious. As a mathematician, you must be very precise with definitions and choose your words carefully.” 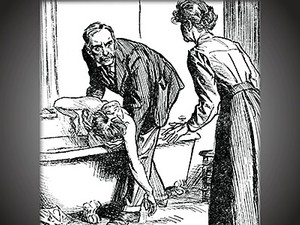 J.M. Brock's 1915 sketch 'Murder of Alice Burnham’ depicts George Joseph Smith and his landlady discovering the body of Smith’s new bride in a bathtub. A rule of evidence known as the ‘Doctrine of Chances’ developed from Smith’s murder trial. 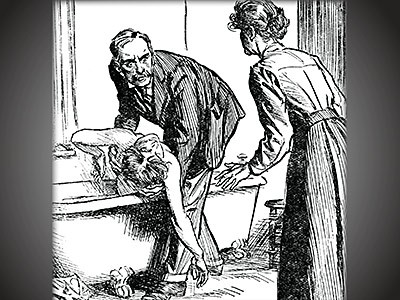