Under blue skies and mild temperatures, Utah State University geologists, along with collaborators from across the nation and overseas, gathered Sept. 27 in Idaho’s rural Lincoln County to begin the first phase of a two-year geothermal drilling project.
Site preparations began two days earlier at Kimama, the first of two south central Idaho project drilling locations, where personnel from the Salt Lake City-based DOSECC consortium (Drilling, Observation and Sampling of the Earth’s Continental Crust) spread large pieces of structural fabric and covered them with gravel.
“On our first day of drilling, we started with safety orientation training in the morning and began drilling of the Kimama deep hole in the afternoon,” says John Shervais, project director for “Project Hotspot” and professor in USU’s Department of Geology. “By the second day of drilling, we made 180 feet of core.”
The Kimama hole will eventually be a mile deep. Shervais says the drill will penetrate earthen crust in excess of 212 degrees Fahrenheit.
One of 123 projects awarded Recovery Act funding by the U.S. Department of Energy in 2009, Project Hotspot is among 24 “Innovative Exploration and Drilling Projects” focused on the development of new geothermal fields using innovative sensing, exploration and well-drilling technologies.
While Project Hotspot is focused on investigating the geothermal heat potential of the expansive igneous province, it’s also an opportunity to decipher the region’s volcanic history.
“We’re looking at the Yellowstone-Snake River hotspot system’s source and its recurrence intervals for eruptions, as well as the geothermal energy potential,” Shervais says.
USU geology professor Jim Evans is a co-investigator on the project, which includes collaborators from Boise State University, Canada’s University of Alberta, Southern Methodist University, the U.S. Geological Survey and the International Continental Drilling Program based in Potsdam, Germany.
In addition to the Kimama site, another mile-deep hole will be drilled near the town of Kimberly, Idaho, about five miles east of Twin Falls. The $6.4 million project, which includes $4.6 million from the DOE along with funds from the ICDP and university partners, will create dozens of jobs as well as many student research opportunities.
“So far, we’ve hired five graduate students, several recent USU graduates, and several graduates from other geology programs to work at the project site,” he says. “We plan to hire several undergraduate students to do work on the project in our USU campus labs very soon. Our co-investigators are also hiring students to work on their contributions to the project.”
Readers can follow Project Hotspot’s progress on Facebook.
Related links:
Contact: John Shervais, 435-797-1274, john.shervais@usu.edu
Writer: Mary-Ann Muffoletto, 435-797-3517, maryann.muffoletto@usu.edu 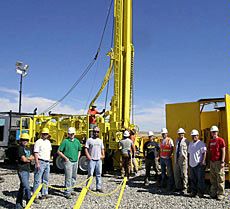 The Rig is Up: Drilling begins on USU-led 'Project Hotspot,' a stimulus-funded geothermal drilling and research project on Idaho’s Yellowstone-Snake River Plain. 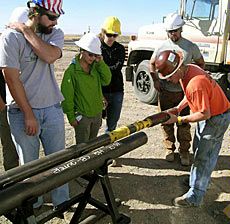