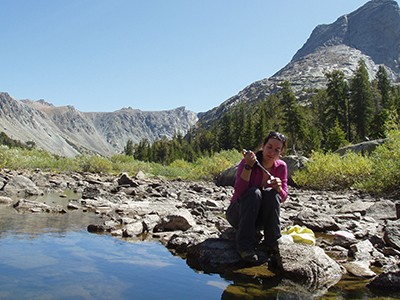 Dust may be as old as dirt, but in that dust is valuable information. Atmospheric dust is important because it consists mostly of tiny particles of soil, which contain nutrients, metals, clays and carbonates making dust a significant vector of biologically important compounds.

According to current research, dust has a significant impact on the biological productivity in oceans, forests and freshwater lakes, which has the potential to increase carbon storage across these varied landscapes. Dust is what Janice Brahney, assistant professor of watershed science in the Utah State University Quinney College of Natural Resources really digs. Brahney’s research focuses on the impact of that dust on freshwater ecosystems.

Advanced atmospheric models and improved satellite imagery have enhanced science’s understanding of dust movement. Brahney examines the composition of dust, how it moves through the atmosphere and how it affects the land where it is deposited.

“The atmospheric transport of material is at present a large unmeasured component of critical biogeochemical cycles, like that of phosphorus,” says Brahney. “These nutrients deposited with dust have significant effects on lake ecosystem function including productivity, species composition and carbon cycling.”

The shores of the Great Salt Lake, along with other playas and desert environments, are the leading contributors of dust in Utah.

“Atmospheric dust arises from these low-elevation basins and is then deposited in mountain environments that act as natural barriers to transport,” continues Brahney, who is interested in finding out how dust deposition impacts the nutrient availability and biology of affected lakes and rivers.

In the last 20 years, the population of the Wasatch Front has increased and land-use changes have increased apace. Researchers don’t yet know enough about how population growth and industrial activity have contributed to elevated dust levels in the atmosphere. Nor do they know much about the composition of the dust.

“Collecting enough dust material to measure composition and test for direct biological impacts has been difficult, but we are working on methods to collect this material across much of the American West in order to do these experiments,” Brahney said. “It appears as if elevated dust deposition has a significant effect on low-nutrient freshwater systems through the delivery of critical nutrients, like phosphorus.”

Although one doesn’t often see the large dust events that happened in the dust-bowl era, Brahney’s work has shown that small dust events can have a large cumulative and profound effect on low-nutrient water ecosystems, such as mountain lakes and rivers.

“Because dust transports both major and minor nutrients, it can have a stimulating effect on ecosystem productivity leading to greater carbon storage in marine, terrestrial and freshwater environments,” she concluded. 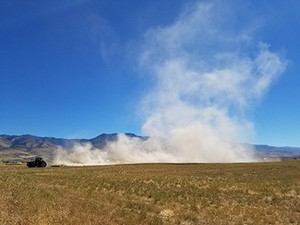 The dust trail of one tractor in Cache Valley Utah. 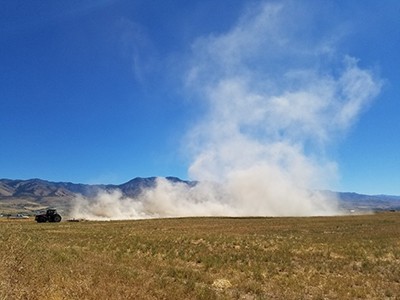