“Growing up in Tremonton, Utah, near ATK Thiokol’s shuttle propulsion systems manufacturing plant, I especially felt the program’s importance,” says Ryan Martineau, an undergraduate member of USU’s Get Away Special space research team. “Each shuttle voyage has been a dynamic feat. They launched astronauts into space, helped us assemble the International Space Station and carried hundreds of experiments into orbit. It really feels like the end of era.”

USU grad student Troy Munro ’11, a West Valley City, Utah, native who grew up just north of ATK’s Bacchus facility, remembers neighbors talking about the shuttle program throughout his childhood. But it wasn’t until last summer, when he worked as an undergrad engineering intern at ATK’s nozzle manufacturing center in Howell, Utah, that he began to appreciate the technological magnitude of the NASA space vehicles.

“Until my internship, I didn’t realize how complex of a machine the space shuttle is,” he says.

Munro and Martineau, both members of the Aggie GAS team that flew a successful experiment aboard a NASA microgravity jet in June, will gather at USU’s Logan campus with other students, faculty and staff to watch the last shuttle lift-off. Across the country, a group of USU GAS alumni will view the launch from Florida’s Kennedy Space Center as VIP guests of NASA administrator Charles Bolden.

“We’ll be up at the crack of dawn riding in a chartered bus navigating what are expected to be record-breaking crowds,” says Terry Thomas ’85, a member of the USU team that sent NASA’s very first Get Away Special payload into space aboard Space Shuttle Columbia in 1982.

NASA initiated “GAS” in 1976 — a self-contained payload program to provide individuals and groups outside the space agency with the opportunity to fly experiments of their own design aboard the shuttles. Former USU faculty member Gilbert “Gil” Moore seized upon the opportunity, reserving the first payload slot with his personal check. From 1982 to 2001, USU flew 11 GAS payloads on 10 shuttle flights containing more than 30 student-built experiments — the most of any university in the world.

“The Get Away Special program was NASA’s finest effort to involve young people in space experimentation,” says Moore, who now resides in Colorado and heads Project Starshine. “Based on those experiences during their formative years, many of those student investigators have gone on to occupy highly responsible positions in the space program and make significant contributions.”

Thomas, who attended the 1982 Columbia launch with his USU teammates, says he’s excited to witness the pivotal finale of the shuttle program.

“I thought the Columbia launch was a once-in-a-lifetime event,” says the Boeing engineer who resides in the Seattle area. “The fact that I get to experience this again, this time with my children, is just phenomenal.”

Going to the Kennedy Space Center with faculty mentor Moore in 1982 to watch the shuttle carry their experiments into space was just the first leg of marathon journey that Thomas and his fellow GAS team members undertook as part of their initial NASA adventure. Following the launch, the Aggies hopped in their vans and caravanned to Houston’s Johnson Space Center. Once there, the irrepressible Moore wrangled permission for the students to enter Mission Control to watch the shuttle astronauts activate their payload.

“It was surreal,” Thomas says.

From Houston, the GAS team drove virtually non-stop to California’s Edwards Air Force Base, where they arrived in time to watch Columbia return to an all-star audience.

“President Ronald Reagan gave a speech following the landing but, truthfully, we were most impressed by Olympic star Bruce Jenner,” he says. “Back in Logan, we were invited to serve as grand marshals for USU’s homecoming parade and, the following spring, we won a Robins Award for our efforts.”

“The benefits to the students who’ve participated in the GAS program are immeasurable,” says the Brigham City, Utah, native. “USU led the way in a program that broke stereotypes about cutting-edge space research. Students proved that good science and engineering could, in fact, be done successfully by undergraduates with a Spartan budget and a Spartan set of equipment.”

NASA discontinued the GAS program following the 2003 Columbia disaster, but the USU GAS Team forged ahead, seeking new opportunities to get their experiments into space — or at least into microgravity. The team’s nucleic boiling experiment that flew on Endeavour in 2001 laid the groundwork for two subsequent experiments that USU students successfully conducted aboard NASA microgravity ‘vomit comet’ airplanes in June 2010 and June 2011. The innovative heat transfer experiments contribute to knowledge needed for future long-duration space travel to Mars and beyond.

Martineau, who will serve as a GAS team leader during the 2011-12 academic year, says the team plans to submit yet another proposal for NASA’s Microgravity University (for a possible ‘vomit comet’ ride in 2012) and is also designing a cube satellite. In addition, the team has ambitious plans to build their own rocket to carry experiments into space.

“If there’s any university that can build a space rocket, Utah State is the place,” says Thomas, who, on a recent visit back to Utah State commented that the student GAS lab is “as messy now as it was when I left it.”

“The GAS program is one of USU’s great success stories,” he says.

A final piece of trivia: USU GAS experiments flew on every space shuttle — Columbia, Challenger, Discovery and Endeavour — except for Atlantis.

The university community is invited to join USU’s current GAS Team and the USU Society of Physics Students Chapter to watch the final shuttle launch, scheduled for 9:26 a.m. Mountain time, in SER 244. 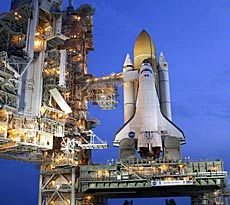 Ready for Launch: Atlantis is set for its final voyage July 8. Aggies will watch "the end of an era" and reminisce about USU's long and rich involvement with the space program. Photo by Tony Zaperach, courtesy of NASA. 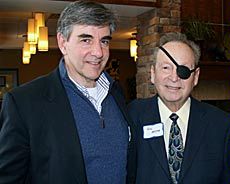