Energy powers everyday life. From the cars we drive, to the computers we use, to the heat that warms our homes, we rely on energy. And because of the rising costs and decreasing availability of fossil fuels — oil, natural gas and coal — used to traditionally create energy, solutions using alternative renewable energy sources are needed.
Utah State University answered the call, first by becoming involved with the Utah Science, Technology, and Research (USTAR) initiative in 2007, and now with the creation of the Energy Dynamics Laboratory (EDL) in late 2009.
A natural outgrowth of initiatives at USU in the areas of biofuels and advanced sensing and imaging, EDL focuses the applied research, development, design and implementation of green, renewable energy and environmental solutions for government and commercial customers. While the USU Biofuels Center and USU Center for Advanced Sensing and Imaging focus on early stage research to create biofuels from algae and new environmental sensing methods, EDL takes it one step further by creating larger-scale prototypes and methods to implement the technologies that come from USTAR research.
The Logan Lagoons project in Logan, Utah, is an example of how the hand-off between foundational research at the university to development of prototypes by EDL works. The USU Biofuels Center Director of Engineering, Ron Sims, conducted USTAR-funded research at the wastewater lagoons to determine if high oil-producing algae could be used to remove phosphorous and produce biofuels. If not checked, phosphorous discharged into streams can have devastating effects on downstream ecosystems. After proving the concept viable, Sims enlisted EDL to lead a team that includes the USU Biofuels Center, the Municipal Environmental Department of Logan, and USU’s College of Engineering to design and develop a wastewater and environmental remediation system. The pilot facility will be located at the lagoons and will harvest algae that consumes nitrogen and phosphorous while producing biofuels.
“It’s a win-win situation for everyone,” said Ned Weinshenker, vice president of strategic ventures and economic development. “The biofuel created at the facility will be used to power facilities and vehicles. This alone will save taxpayers and the City of Logan thousands of dollars a year.”
Researchers from both USU and EDL credit the impending success of EDL’s first venture to USU’s Strategic Ventures and Economic Development Office, which, in concert with the USU Vice President for Research Office, the President’s Office, college deans and the USU Research Foundation, saw the value and potential of creating EDL to develop renewable energy technologies.
As a unit of the Utah State University Research Foundation, EDL received $500,000 from USTAR to begin the new venture. According to Jeff Muhs, who is affiliated with both EDL and the Biofuels Center, EDL’s projected revenues in the first year of operations will total more than $4 million with the potential to go beyond. At the USU Biofuels Center, the benefits are already evident. More than 60 people are involved with the center and the researchers have nearly matched the original USTAR investment of $6.5 million in new grants and contracts.
Looking forward, EDL will focus its efforts in four main areas: advanced biofuels, intelligent end use energy systems, clean fossils and energy innovation. Research has begun in all areas, and everyone looks forward to the energy innovations to come.
“EDL’s focus areas will improve America’s energy,” Weinshenker said. “New forms of alternative energy will allow us to reduce our dependence on foreign oil, improve air quality, and reduce our overall carbon footprint. The innovations will also create jobs and increase tax revenues.”
Indeed, the future looks bright at both the USU Biofuels Center and EDL as they prepare to develop many forthcoming new technologies and innovations.
Contact: Jeff Muhs, 435-797-4687, jeff.muhs@usu.edu
Writer: Maren Cartwright, 435-797-1355, maren.cartwright@usu.edu 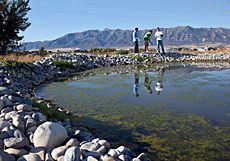 USU's Energy Dynamics Lab focuses on applied research and implementation of green, renewable energy and environmental solutions. The Logan Lagoons project is an example of how the hand-off between research at USU develops prototypes by EDL. 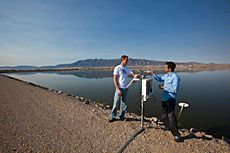 Faculty and graduate students work on the Logan Lagoons project.