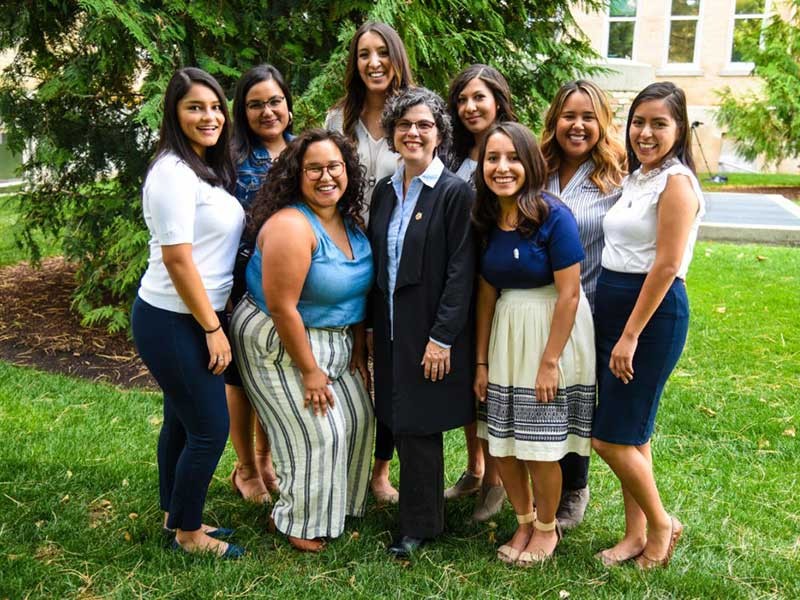 Nine women were selected to be highlighted for their involvement and influence at USU.

Ketzel Morales feels intimidation walking into a classroom where she is the only woman of color — but she uses that as a motivation to challenge and push herself.

“I honestly think of that as a challenge and a way to push myself to go outside my comfort zone,” she said. “Realizing that that’s an essence of me that makes me unique and makes me part of who I am.”

In her three years at Utah State University, Morales has wrapped herself in involvement. She is involved in the Theta Nu Xi sorority, an intern at the Access and Diversity Center, president of the Latinx Student Union, a member of the Government Relations Council, a member of the Utah State University Student Association Traditions Committee and a mentor at Aggie First Scholars.

As a Latina, Morales said she is often looked to in class as a spokesperson for all people of color, which frustrates her.

“When you’re the only person of color in one of your classes, everybody wants you to speak for everybody that’s a minority,” she said. “Just because one person has an experience doesn’t mean every poc has that same experience.”

As a seventh year Aggie, Grace Jimenez has actively worked to increase diversity and inclusion on campus, particularly among multicultural students.

Now pursuing her second bachelor’s degree in human development, Jimenez has served as USUSA diversity cabinet director, the vice president of Latinx Student Union, an intern at the Access and Diversity Center and now works in the Admissions Office as a multicultural recruitment specialist.

Throughout her time at USU, Jimenez has experienced microaggressions — subtle racist comments — regularly.

“Microaggressions are those everyday comments people make throughout the day that don’t realize that they are microaggressions,” she said.

Jimenez said because she’s a Latina, people often assume she enjoys spicy food. However, as a Colombian, spicy food is not a staple of her culture.

“That in itself is a microaggression,” she said. “One: don’t assume all Latin people like spicy food, and 2: I’m Colombian and it’s not in our culture to cook very spicy food.”

“I’ve has people ask ‘what kind of brown are you?’” she said. “That’s just distasteful.

Thinking about her Honduran heritage makes Paulina Rivera-Soto proud to represent her culture on campus.

“I think what I’m most proud of is the way in which my heritage has shaped who I am,” she said. “Just looking at the history of my people and our culture and how it’s been this constant story of resilience.”

Rivera-Soto currently sits on the Government Relations Council, works as an ambassador in the College of Humanities and Social Sciences and is working with the new Latinx Cultural Center.

While Rivera-Soto is proud of her heritage, dealing with “ignorant comments” is a regular frustration for her.

“People look at you and they automatically assume that they know you based on the color of your skin,” she said.

Karina Hernandez loves that her culture celebrates unity and family.

“I love that I come from a collective community,” she said. “We really work to raise others alongside ourselves and to contribute to the community and greater good.”

Hernandez, president of the Theta Nu Xi sorority, a member of the A-Team and a council member of the Latinx Student Union, grew up in Rexburg, Idaho, with parents who immigrated from Mexico.

For Jenny Patino, one of the hardest parts of being a Latina at Utah State University is finding people who look like her.

“Utah State has pride in being a diverse university, but it’s not very diverse,” she said.

While on the A-Team, Patino said she was the only Hispanic woman, which was difficult for her.

However, Patino is proud of her heritage because of the hard-working reputation of Hispanics.

“Us Hispanics are really hard workers, we’re really dedicated to what we want to accomplish,” she said.

As a Mexican woman, Cirina Gonzalez gets frustrated when she’s asked insensitive comments about her culture, which happens often.

One reason for this, she believes, is due to USU’s lack of students of color on campus.

Gonzalez is a senior studying marketing, a member of Theta Nu Xi sorority and a member of the Latinx Student Union.

“So many times I’ve been the only diverse person on campus,” she said. “This campus isn’t as diverse as people think. It’s just kind of a lonely feeling in class.”

However, Gonzalez takes pride in her heritage and traditions.

“For example, celebration of Day of the Dead what it means to us, how we celebrate it,”she said.

Melanie M. Domenech Rodriguez is a professor of psychology at USU. She has been working for the university since 2000.

Rodriguez was born and raised in Puerto Rico. She came to the U.S. to pursue an education.

Much of her time is taken up mentoring graduate students in research labs. She is currently the chair of the Institutional Review Board. Rodriguez loves teaching and working with students.

“My hope for my students is that the will learn and celebrate how incredibly special they are and how much they have to offer,” Rodriguez said. “Their perspective is incredibly valuable to advancing the field.”

Nahomi Jimenez is a senior studying environmental science, sister to Grace Jimenez and a member of Theta Nu Xi sorority.

Nahomi is this year’s USUSA’s Diversity Director, a title she holds dear

“I find it so important to have more representation on our campus,” Nahomi said. “As a leader on our campus, I want to speak for those who aren’t being listened to.”

Nahomi  has enjoyed her time working with multiple university organizations throughout her time at USU, but has a special love for Theta Nu Xi.

“Being a part of this community, especially as an Aggie has really made me feel part of something bigger than myself,” Nahomi said.

Andrea Diaz Flores is an international student at USU who works as a resident assistant for Blue Square and is an ambassador for the university.

Flores was born and raised in Mexico City, although she has been studying abroad since she was 11 years old.

“It’s like I’ve been living in two different worlds — Mexico and the United States,” Flores said.

Flores said living in both countries has shaped her in different ways.

“I kind of feel like I have to put on two personalities,” she said. “Here at Utah State I’m so involved, very friendly, outgoing, but back home I’m more conservative, not too loud, and maybe that’s just because of the way I was raised in Mexico versus the way I was raised here."

“I wish people could be more understanding, and just show more empathy,” she said. “If you happen to meet another person from another country or another place just get to know them, and become that family that they don’t have.”