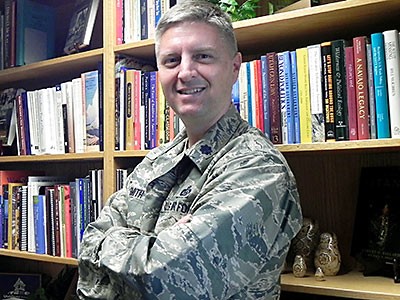 The new director of Utah State University’s Air Force ROTC program is a lieutenant colonel with expertise in Chinese and Asian diplomacy.

“I’ve had a pretty broad career that has let me do a lot of different things,” said Smith. “So I’m really glad it’s led me to this.”

Smith replaces Lt. Col. Alex Dubovik as professor of aerospace studies in USU’s College of Humanities and Social Sciences. The position is a three-year active-duty posting.

In May, USU’s Air Force four-year ROTC program commissioned nine second lieutenants, who are continuing their training in careers from flying to engineering.

Smith’s years of experience in international affairs will be an asset in training young military officers who are stepping into international careers, he said.

“We’re preparing them to operate in the world,” Smith said. “They have to understand what’s going on globally because they will, within months of graduation, find themselves in different parts of the world, responsible for conducting operations in support of allies and partners against enemies such as non-state actors like ISIS, Al-Qaeda and the Taliban.”

Smith, a graduate of Provo High School and Brigham Young University’s ROTC, served in the Utah Army Utah National Guard for eight years. After graduating from BYU and earning his commission through the BYU AFROTC program, he spent six years as an intelligence officer, he said. He was named an Olmsted Scholar, one of five such distinctions awarded annually in the Air Force, and was assigned to China to continue his education.

After earning a master’s degree in international politics from Shanghai’s Fudan University, Smith worked at Headquarters Pacific Air Forces in Hawaii as a regional affairs strategist (RAS), responsible for managing and overseeing interactions between the United States and the air forces of China and Taiwan. He’s worked in Australia, New Zealand, Japan and Korea, as well as an assignment in Kabul, Afghanistan.

Following his years in China, Smith attended Air Command and Staff College School and the School of Advanced Air and Space Studies, both at Maxwell Air Force Base near Montgomery, Ala. Most recently, he earned his doctorate in international studies at the University of Washington, writing his dissertation on the growth of Chinese military diplomacy during the decade of 2002 to 2012.

When Smith finishes his three-year stint at USU, he will return to Maxwell Air Force Base to join the SAASS faculty.

Smith said he’s pleased to see a continuing expansion in AFROTC numbers. In 2008, USU had 69 active cadets. Eight years later, the number is at 110.

“It’s been steadily growing like a stock-market chart,” he said. “These cadets represent Utah State very well as they go on to do great things in the U.S. Air Force and beyond.”