Before embarking on a study abroad trip to the Horn of Africa in summer 2008, Utah State University undergraduate Leah Hazlett says she didn’t know what to expect.

“For me, going to Ethiopia was a phenomenal, life-changing experience,” says Hazlett, a junior environmental studies major. “It’s really shaped, and reinforced, the way I now look at the world, myself and American culture.”

Her travel companions, Ashley Champlin, Kelly Sivy and Annie Wilson, concur. The quartet, all undergraduates in USU’s College of Natural Resources, visited a variety of sites throughout Ethiopia as students in a special topics Environment and Society class. Entitled “Globalization: Human and Environmental Linkages in Ethiopia,” the class was coordinated by faculty members Layne Coppock and Claudia Radel and a USU team of Ethiopian nationals.

“The experience opened my eyes to how different cultures have different values depending on their immediate needs,” says Sivy, a senior conservation and restoration ecology major. “Sometimes it’s a choice of feeding your family versus sustainability. I realized, when I approach global issues, I need to consider varied perspectives.”

During the course of their nearly month-long visit, the four students evaluated the effects of globalization on four sectors of Ethiopia’s economy: livestock production, wildlife management, cut-flower production and coffee production.

“Globalization refers to the transition from locally based economies to increased interaction and integration with groups outside the country through foreign investment, exporting and importing,” says Wilson, a senior recreation resources management major.

While Ethiopia, one of the world’s oldest continuous civilizations, is no stranger to foreign influences most of the landlocked nation’s population lives in rural areas. The country has a number of rapidly growing urban areas but still lacks a widespread transportation infrastructure needed for easy accessibility to foreign markets.

Even so, Ethiopia and its economy are evolving and those changes are having a marked impact on the Ethiopian people, the students say.

“Growth, development and globalization are having many positive effects, but there are also negatives that shouldn’t be overlooked,” says Champlin, who recently completed a bachelor’s degree in geography and is now pursuing studies in secondary education.

Hazlett notes, for example, that Ethiopia’s fledgling cut-flower industry is largely dependent on foreign investment, which brings much needed capital, technology, employment and educational opportunities to the country. Yet the industry also diverts precious water supplies and fertile farmland away from food production.

“There’s a conflict between cash crops versus food crops,” she says. “Most of the cut-flower crop is produced for export. Emphasis on cash crops generates revenue but makes Ethiopia more dependent on external sources for food.”

The growth of the cut-flower industry as well as the coffee industry, both of which are predominately export industries, makes the Ethiopian economy vulnerable to the whims of upscale foreign consumers.

“It’s difficult to anticipate global demand for these commodities and difficult for Ethiopia to capture profit at its end of the market chain,” Sivy says.

Among Ethiopia’s other resources is an abundance of unique wildlife, which the country is struggling to protect and conserve.

“The United States’ Yellowstone National Park is a number one tourist destination,” Wilson says, “Why? Because of its vast space, natural setting, accessibility and amenities for travelers – all protected and conserved under government regulations.”

Contrast Yellowstone, she says, with Ethiopia’s national parks and preserves.

“With varied ethnic groups who have lived in these areas for centuries it’s hard to manage the harvest of wildlife and prevent poaching and grazing,” Wilson says. “There’s a low awareness of the value of wildlife and the need to protect threatened and endangered species. Many of the people who live in these areas depend on woodcutting, fishing and livestock production and are struggling to make a living. And there are simply inadequate law enforcement mechanisms in place.”

During their visit, the students visited cooperative collective-action groups initiated by the USU-led Pastoral Risk Management Project, known as “PARIMA,” which has operated among pastoral groups in Ethiopia’s Borana rangelands for the past decade. PARIMA, funded by the Global Bureau of the U.S. Agency for International Development, is directed by Coppock, associate professor in the Department of Environment and Society.

“We met with leaders from some of the women’s groups that have been formed through PARIMA,” Wilson says. “What amazed me is how, with a little education, information from mentors and the development of a modest loan system, these women have built small, sustainable businesses that have made a huge impact on their lives. They have more economic security and they’re able to afford to send their children to school. This shows, first-hand, the value of education.”

The students agreed that access to education is key to Ethiopia’s economic success and could be the most important determinant in how globalization ultimately impacts Ethiopian peoples and environments. They also agreed that educated consumers here in the United States could make a big difference through mechanisms such as “fair trade” certifications. 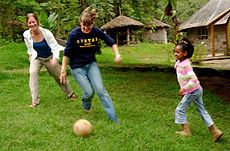 Aggies Kelly Sivy and Ashley Champlin join an impromptu soccer game while visiting a village in a coffee-producing region of Ethiopia's highlands.