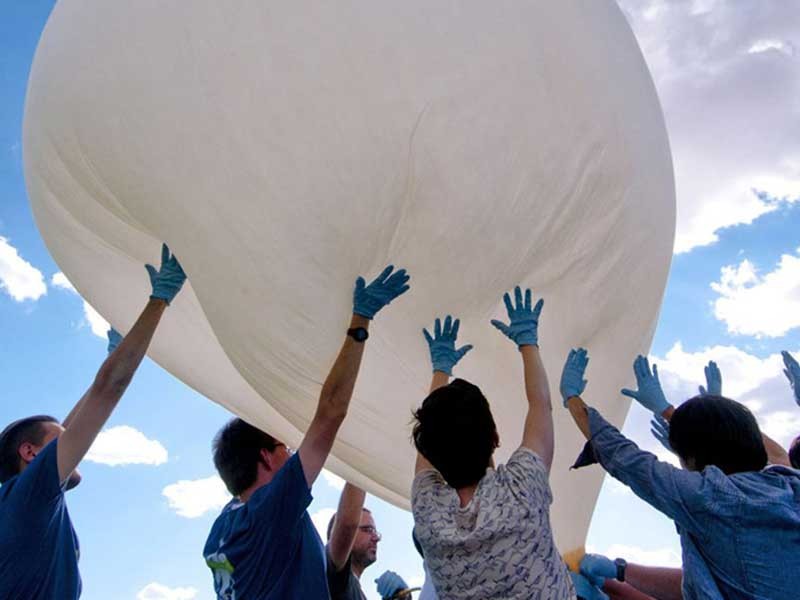 A 10-centimeter tall cube will soon make its way through the galaxies of time and space. An inflatable arm, used to control the satellite, will then be used to carry a payload of food and water up to the International Space Station.

From there an astronaut will send it out into the void of space to start its orbit.

There, it will gather data that engineers will use as inspiration for future projects.

A slight amount of air in lower orbit will hopefully stabilize the arm of the satellite, and like a long tail, will stop it from a continuous spin. This stabilization will help the satellite fly like an arrow.

“The hope,” said USU Getaway Special Team member and electrical team lead Nik Clark, “is that the arm of the satellite, where the payload is, will become a rigid structure when exposed to UV light.”

According to Clark, NASA is interested in knowing if things can be inflated in space, making for a more lightweight and compact structure.

“It also means you can pack things into a small size that later expands into a bigger size,” Clark said.

But none of this is guaranteed. Although Utah State University has been putting engineering experiments into space for four decades, a shift in NASA programming led to a period of scientific stagnation.

The NASA program that was known as Getaway Special once allowed university payloads relatively cheap access to orbit.

A team at Utah State University, aimed at taking advantage of the program, started small with one payload on one shuttle.

The cost was $15,000 and funded by Gilbert Moore, a former USU faculty member who donated the first payload allotment. As a result, the Getaway Special team, or GAS team, at USU was born.

Jan Sojka was there from the beginning. At the time, he was a postdoctoral fellow, interested in creating a three-dimensional model of the Earth’s upper atmosphere, known as the Ionosphere.

This model was used to predict the environment where the space shuttle, space station and many satellites circulated the Earth.

For his Ph.D. research, he launched three-stage sounding rockets into the northern lights.

Though emotions ran quite high in those launches, he felt the most rewarding feelings came from launching something he built on the space shuttle with students on the USU GAS team.

“I sure am pleased to be a rocket scientist,” Sojka thought as he watched his project come to life in the sky. “It was a sense of pride that I was associated with a student payload on board the shuttle. My payload.”

At least 11 payloads, with three to six experiments on each, were flown during the NASA GAS program.

Then, NASA terminated the GAS program. Few projects left Earth’s atmosphere and USU’s GAS team entered stagnation and faded in and out at USU.

The stars still wait. The future is watching.

Now, with a renewed partnership with NASA and 40 years after the initial payload, Utah State has another opportunity at orbit, and team members are committed to building a legacy that fellow Aggies will be proud of for years to come.

Six years ago, past students submitted a proposal to NASA’s CubeSat Launch Initiative. The space agency’s approval paved the way for the return of USU’s GAS team, but there was still a long way to go if USU was to get its experiments back into space.

Chaz Cornwall, the GAS team coordinator, said, while the team’s primary focus has been to produce something functional that gets to space, the projected end result is more than that.

“We’ve been told this project should be abandoned, but really, a big part of this is to prove those people wrong, and show them that we can do this,” Cornwall said.

This past summer, Sojka felt the team was making little progress with its CubeSat, working in a methodical, constructive way. But skepticism and other obstacles weren’t enough to stop a determined group of engineers from what they had worked so hard to achieve.

GAS had little direct contact with NASA in the preliminary process, except a visit from Scott Higginbotham, the director for the NASA CubeSat Launch Initiative during the Small Satellite Conference held at USU.

Sojka said he challenged the team in the 40 hours before Higginbotham arrived to “get their act together.”

“They did an excellent job,” Sojka said. “The demonstration worked perfectly, and Higginbotham gave the team a year before he pulls the plug.”

Members like Jack Danos, the mechanical team lead, entered the project at a time of uncertainty.

“We had several things that could have basically cancelled our mission,” Danos said. “We’re now at the point where assuming we put in the work we’re going to fly this thing to space.”

Alex Nelson, the chief engineer, said the team has been revived through the passion and determination of its members.

“It started out super frustrating because it felt like whenever we met a barrier, people were telling us we shouldn’t be doing this, but we’ve had so much success and enthusiasm that we are finally breaking down those barriers,” Nelson said.

Sojka is now confident in the team’s ability to succeed.

“I find that the team I have now, I think, will be able to pull it off,” Sojka said.

Caleb Smith, the GAS communications team lead, explained that most of the teams before them had space projects that usually fell apart right at the PDR stage.

“It’s a really cool project very few people get a chance to do,” Smith said. “We’re definitely on the right track. We just have to keep pushing.”

GAS is not just about putting things into space, but is focused on providing opportunities for subsequent cohorts of students to do the same.

“Because of the chances that people before us took, I have this great opportunity, and I’d like to be able to continue that for future generations,” Nelson said.

The team of 20 members is growing slowly but steadily. GAS continues to welcome new members from any major, regardless of their engineering or non-engineering backgrounds.

Emma Hind, a communications major, found the GAS team to be one of the most fulfilling things she has participated in while in college.

“I’ve learned a lot more practical skills than I have in class,” Hind said. “It’s given me a lot of real-life experience because I’m actually doing some of the same things I will be doing in the workforce, not just learning it in the classroom.”

With a year left to go and preliminary reviews checked off by NASA, the GAS team has reason to celebrate. Where teams of the past failed to deliver, the current team found success.

Assuming the team meets its current goals and deadlines, a CubeSat from USU is headed for space in 2020 or 2021.

“No undergraduate-led team has put a CubeSat into space from USU,” Cornwall said. “We’re here to make history.”