Utah State University researchers are walking on air after setting a land speed record with a novel race car of their own design. Adding to their excitement is the vehicle’s fuel source: a USU-developed biodiesel crafted from surprising origins.

“How many people get to drive a car they helped build with fuel they created from a living microorganism?” asks USU undergrad biochemist Michael R. Morgan, who drove the dragster across Utah’s Bonneville Salt Flats Speedway to its landmark finish.

The Aggie A-Salt Streamliner, as it’s officially known, runs on yeast biodiesel derived from the industrial waste of cheese production. The sleek, Aggie-blue hot rod was among some 200 high-tech racers competing at the Utah Salt Flats Racing Association’s 2012 World of Speed event Sept. 8-11.

“This is a real pole in the ground for Utah State,” says Lance Seefeldt, professor in USU’s Department of Chemistry and Biochemistry and a principal faculty mentor on the interdisciplinary project. “Setting the land speed record in this vehicle’s class on sustainable biofuel produced at USU underscores the outstanding quality of our school’s biochemistry and engineering programs and further validates the technology in this important sector.”

At its top speed, the Aggie vehicle clocked in at 65.344 miles per hour. At first glance, that speed may fail to impress NASCAR fans or even most interstate motorists. But make no mistake; it’s a head-turning achievement for a biofueled vehicle with a one-liter, two-cylinder engine. The USU team raced the dragster in separate runs, using petroleum diesel and the yeast biofuel, respectively. Powered with the latter, the speedster was able to match its previous petroleum-fueled run.

“Developing a biofuel on a large enough scale to run in the dragster was a tough undertaking,” says USU biochemist Alex McCurdy, a third-year doctoral student in Seefeldt’s lab, who is supported by a National Science Foundation research assistantship and is the recent recipient of a departmental environmental chemistry award. “It’s one thing to produce a small amount in the lab and discuss how it will work in theory. It’s another to actually put it in a dragster, while everyone watches it take off.”

With McCurdy, Morgan and other student team members in the colleges of Science and Agriculture, Seefeldt and Bruce Bugbee, professor in USU’s Department of Plants, Soils, and Climate, have been working for more than a year to perfect the production of the fuel using yeast and bacterial platforms, as well as developing fuel from carbon dioxide and the Sun using microalgae platforms.

“We’ve recently succeeded in producing quantities of fuels from all of these sources that have superior properties in test engines, comparing favorably to biodiesel produced from soybeans,” says Seefeldt, recipient of USU’s 2012 D. Wynne Thorne Career Research Award, the university’s top research honor. “The USU fuels are a renewable, low-footprint replacement for petroleum diesel and they don’t compete for food crops.”

Meanwhile, student and faculty team members in USU’s College of Engineering, mentored by Byard Wood, professor and head of the Department of Mechanical and Aerospace Engineering, have been testing the USU biodiesels and report excellent horsepower and fuel emissions. The dragster team, led by Michael D. Morgan, director of USU Engineering’s Student Prototype Laboratory (and, incidentally, father of Michael R. Morgan, the car’s undergrad driver), built the diesel streamliner, with assistance from Utah Chassis and Mott Motorsports, in preparation for the September competition.

“It was amazing for me to have my dad check my belt and gear and give me a ‘thumbs up,’” says the younger Morgan. “It’s just you and the car as you feel it take off and rumble down the track giving it everything she’s got. The Salt Flats lay out before you in an expanse so far that you can see the curvature of the earth.”

Morgan and McCurdy praise the team effort that enabled USU to achieve the milestone.

“It really is an honor to help provide fuel for such a well-designed and engineered dragster,” McCurdy says. “We’re trying to get people excited about our biofuel research and I think setting a land speed record ought to get their attention.”

USU hosts a media demonstration of the Aggie dragster Tuesday, Sept. 18, at the Logan-Cache Airport. For information, contact Jeff DuBois at jeff@methodcommunications.com. 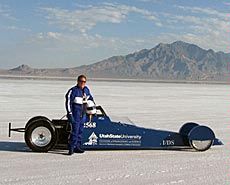 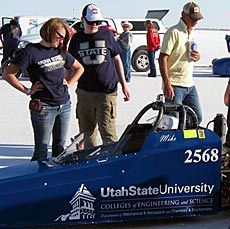