By Shauna Leavitt from the Hard News Café
July 25, 2005 | Folklore is an intimate part of every human's life.
It includes the songs we sing on special occasions, ghost tales, personal histories, jokes, figures of speech, childhood games and rhymes, our religious beliefs, how we celebrate life and mourn death, our family recipes, mealtime traditions and how we beautify our world.
"[Folklore] is the well loved part of our culture," said USU Professor Jeannie Thomas, director of the USU Folklore Program.
It is not traditionally taught in school or written in books. Folklore is learned by word of mouth and the example of others within our groups.
Folk groups include church congregations, family, classmates, co-workers and communities. It is any group we belong to.
Culture's folk groups help stabilized the lore, but they have not prevented the evolution of folklore. Since the middle of the 19th century, the civilized world has been changing at a phenomenal rate. The folklore of today is different from the folklore of 1850.
If the folklore of each century is not recorded, it usually disappears as lifestyles and cultures change. The start of folklore archiving began in the 19th century and has become more sophisticated in the last 100 years.
One of the largest collections of 20th century Western American folklore is housed in Fife Folklore archives in USU's Special Collections.
This week, USU announced that the Fife Slide Collection of Western Vernacular Architecture is now online. The annotated slide collection documents hay derricks, grave markers, mailbox supports, stone houses, quilts, barns, Basque celebrations and much more.
In 1966, the collection began when Utahns Austin E. and Alta S. Fife donated their extensive fieldwork collections, which included acetate discs, reel-to-reel field recordings, 67 bound volumes of field notes/transcriptions and their extensive folklore book collection.
"The Fifes traveled all over the West — most intensively in their native Utah — with a camping trailer, recording equipment, camera and stenographic materials to collect the folk life of the American West, including cowboy songs and Mormon folklore," wrote Randy Williams, Fife Folklore Archives curator.
Williams continued, "From the beginning, the folklore repository has worked closely with those teaching folklore courses at USU." Each semester 30-45 students submit folklore genre collections.
One of the 32 collections the Fife Folklore archives is the The Skaggs Foundation Cowboy Poetry Collection. It is one of the largest in the nation. The collection consists of more than 22 linear feet of books and materials of cowboy poetry and continues to grow.
The archives also contain more solemn works, including personal letters and interviews of people who experienced the Teton Dam disaster of June 5, 1976, and those who watched the terrorist attacks of Sept. 11, 2001.
Many of the archives can be accessed online, including USU's Historical Photo Collection, which dates to the 1800s. Sitting in the comfort of their own home, users can search through the photos.
The photo database simplifies the search process. By typing "Army" a user can see photos of USU ROTC soldiers dating to World War I; or type "temple" and see early photos of Logan Temple.
"(Folklore) is important because it has to do with people's beliefs," said Barre Toelken, emeritus director of USU Folklore program.
Folklore does not mean false. Religious practices, beliefs and faith promoting stories are folklore. They uphold communities.
"When the [European] pioneers left their homelands and came to Utah, they needed something to sustain them and their beliefs did that," said Toelken.
Williams said, "Having the archive is wonderful. No one has a memory as good as we hope."
It's easy to begin exploring the 32 collections within the Fife Folklore Archives. Many of the items can be seen online. Hard copies of the materials must remain in the library. 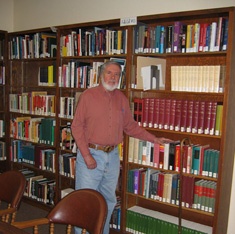 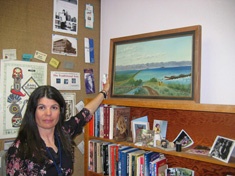 Randy Williams shows off a painting of the Bear Lake Monster. / Photo by Shauna Leavitt