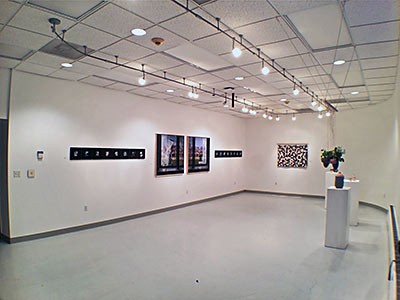 The Student Life section of Utah State Today highlights work written by the talented student journalists at Utah State University. Each week, the editor selects a story that has been published in The Utah Statesman or Utah State News Service (formerly The  Hard News Café) or both for inclusion in Utah State Today without additional editing by its editor.

David Bowie embraced many personalities during his life in the spotlight. Now an exhibit named in honor of the recently deceased singer will seek to do the same.

Seniors in the fine arts program at Utah State University are presenting their showcase, “Oh You Pretty Things,” in the Readymade and Projects Galleries through this week and next. Woody Shepherd, an associate professor of drawing and painting who helped coordinate the annual exhibit, said this year the show is being presented in two smaller galleries, with different students displaying their work over the course of three weeks.

Sommer Baisch, an art education major and printmaker, said the biggest challenge with organizing the show in a smaller space was having to think about which art pieces would look good together.

“The show and the reception was split up into two spaces which isn’t good or bad — it was just different,” Baisch said.

The exhibit is a diverse culmination of several types of art forms from printmaking to sculpture.

“A lot of times combining two-dimensional artists and three-dimensional artists makes it interesting,” Shepherd said. “There’s really some amazing work. Students have worked very hard through experimentation and they’ve funneled it down to create a tight body of work.”

CJ Hales, another artist on display, said the tighter spaces led to “a more intimate conversation with the other artists.”

Hales has 18 paintings on display, including 16 that were each made with 350 strokes each.

The exhibit’s title was derived from a Bowie song that spoke of the supplantation of humans by a more evolved extraterrestrial species. The song packs 15 different chords into a three-minute track.

“I think it was a really good title for this year,” said Brecken Bird, who is a senior in the drawing and painting program. “It accompanied my work pretty well and I think it’s a smart title with the cultural reference of David Bowie’s passing.”

The artists in the show encouraged other students to come to the galleries as the exhibit is a final presentation of the art students’ work.

“I think a lot of people underestimate the time and effort that goes into creating art,” Baisch said. “It’s a culmination of all our work and effort so it’s awesome to see what’s coming out of the art department. It’s always nice to support your local artists.”