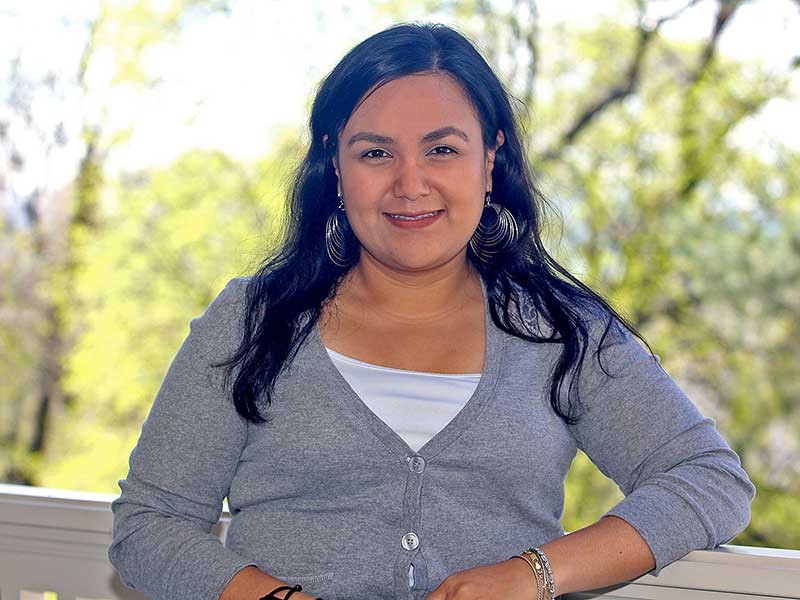 A first-generation Utah State University student from Rexburg, Idaho, Karina Hernandez is graduating this spring with a bachelor's degree in public health with an emphasis in industrial hygiene. (Photo by Jeff Hunter)

Even though she was well on her way to finishing high school with a 4.0 GPA and was among the Top 10 students in her class, Karina Hernandez wasn’t seriously considering attending college after graduation in the spring of 2014.

“I really didn’t think it was going to be an option for my family,” Hernandez says. “We just didn’t have the money for that, and neither of my parents or older siblings had gone to college before me.”

After coming from Mexico in 1990, Maria Del Pilar and Jorge Hernandez briefly settled in the Los Angeles area before making their way north to Southeastern Idaho, where Karina was born and raised. But while both her older siblings struggled with social problems during their high school years, Karina “found a safe place” at Madison High School in Rexburg.

“School was where I focused all of my energy,” she says. “And I had a lot of teachers that believed in me, as well.”

Hernandez also had a religious instructor who was impressed with her, and the former Utah State University student suggested that Karina attend Diversity Day the fall of her senior year and apply for a scholarship at USU. But while she enjoyed her visit to Logan, Hernandez says she left her interview with the admission team feeling “distraught … like I had completely failed.”

“But that evening I was announced as the recipient of a full scholarship,” Hernandez adds. “They saw something in me and believed in me. So, that was definitely life changing.”

Hernandez is one of 477 first-generation students who will graduate from Utah State University during Commencement exercises at the Dee Glen Smith Spectrum on Thursday, May 2, or at other USU satellite campuses this spring. Shortly afterwards, Hernandez, who completed a bachelor’s in public health with an emphasis in industrial hygiene, will embark on her career as an industrial hygienist at Hill Air Force Base in Ogden.

“I think it is important to recognize that being first-generation only means one’s parents did not graduate with a four-year degree,” says Heidi Kesler, director of Student Retention & Completion at Utah State University. “It does not mean these students are in any way less prepared or able. Instead, for many of these students, it has pushed them to be very intentional and self-reliant as they pursue their education.”

Concerned about retention rates of first-generation students, Kesler spearheaded the creation of the Aggie First Scholars (AFS) program two years ago to help provide mentors for students at USU without a family history of higher education.

During the 2018-19 school year, Kesler says that 43 percent of the 619 first-generation students attending the Logan campus accepted the invitation to be mentored by 82 upperclassmen. Of those freshmen who met with their mentor two or more times during the fall semester, 99 percent continued their college experience into the spring semester, compared to 90-percent retention for those who didn’t opt into the mentor program and 93-percent persistence for all freshmen.

“We have also created specific communication plans to assist first-gen freshmen to engage in the behaviors we know lead to persistence and success,” Kesler says. “These include completing the orientation modules, enrolling/successfully completing USU 1010: University Connections, enrolling in the next semester, paying tuition and fees, creating a degree plan in Degree Works, meeting with advisors and completing the FAFSA (federal student aid).”

Hernandez was part of Kesler’s inaugural group of AFS mentors and has had a close relationship with two younger female students the past two years, including one who is now serving as part of Kesler’s leadership team. In addition, her younger brother, Jorge, followed the trail blazed by Karina and was also awarded a scholarship to Utah State, where he just completed his sophomore year.

During Jorge’s visit for Diversity Day, Hernandez pulled her little brother out of bed so he could come along for her 7:30 a.m. public health class.

“I really wanted him to see himself in a classroom and experience it firsthand so he knew that he belonged there, as well,” an emotional Hernandez explains. “I think it’s so powerful to be exposed to the university experience and have someone that looks like you tell you that you belong there and that you can also succeed.”

Karina Hernandez says that during his time at USU, Jorge has benefitted greatly from having an AFS mentor, which helps make Kesler even more determined to expand the program heading into its third year.

Like Hernandez, Jesse Steadman also started at Utah State as a first-gen student prior to the implementation of the AFS program, but the Tooele, Utah native has served as a mentor to other students the last couple of years. He says the Aggie First Scholars has been a great way to get to know other people who were like him, “who didn’t have family who went through college and were kind of figuring things out for themselves.”

“It’s a really, really good program, and I’m excited to see where it goes from here,” Steadman adds. “I know it’s blessed my life, for sure.”

Steadman, who is graduating with a bachelor’s in human biology and minors in chemistry and sociology, and has been accepted into the School of Medicine at the University of Utah, is eyeing a career as an orthopedic surgeon – a potential occupation that first crossed his mind while being attended to in an emergency room after a motorcycle crash.

The son of David and Theresa Steadman, Jesse grew up racing dirt bikes throughout the Western United States with his father and older brother, Brandon. But while four generations of Steadmans have also owned and operated Steadman’s Recreation in Tooele, Jesse says he developed a passion for medicine while being treated for various racing injuries.

Steadman, who served as the student body president at Tooele High School, ended up receiving a Presidential Scholarship offer to Utah State, and says he fell in love with the campus and the community during a visit to Cache Valley. Acknowledging that he’s “the black sheep in the family” by being the first to attend college, Steadman has thrived in the university environment and is graduating as the College of Science’s valedictorian.

“I’m extremely grateful for my experiences up here as a first-generation college student,” Steadman says. “Where my family had been very, very supportive, they didn’t have the perspective of what college was like. But I was able to find professors and mentors in people who have been through college to give me some guidance and advice.

“It’s been amazing up here,” Steadman adds. “That initial spark that I felt the first time I came to the campus of USU has definitely evolved into a great four years here, extracurricularly, as well as in the classroom.” 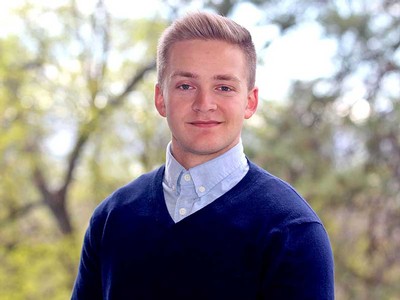 A first-generation college student from Tooele, Jesse Steadman is the valedictorian for Utah State University's College of Science this spring and is headed to medical school following graduation. (Photo by Jeff Hunter) 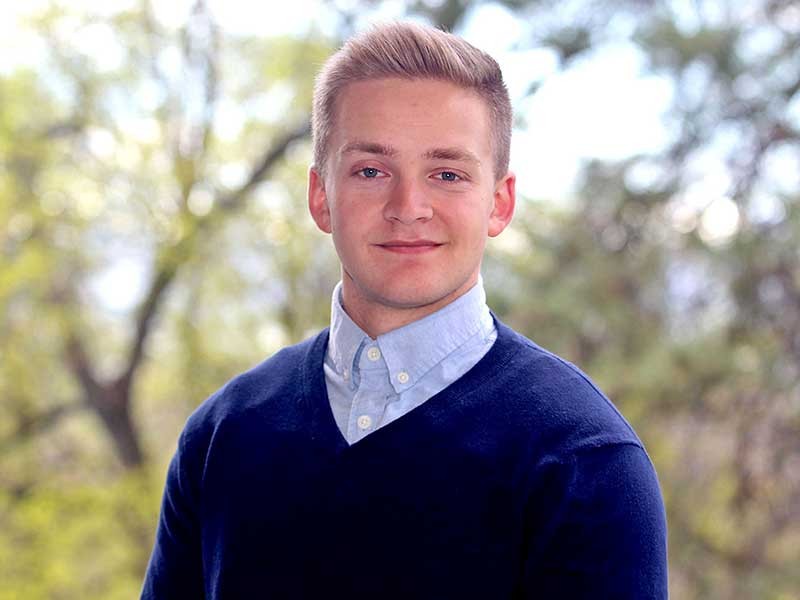