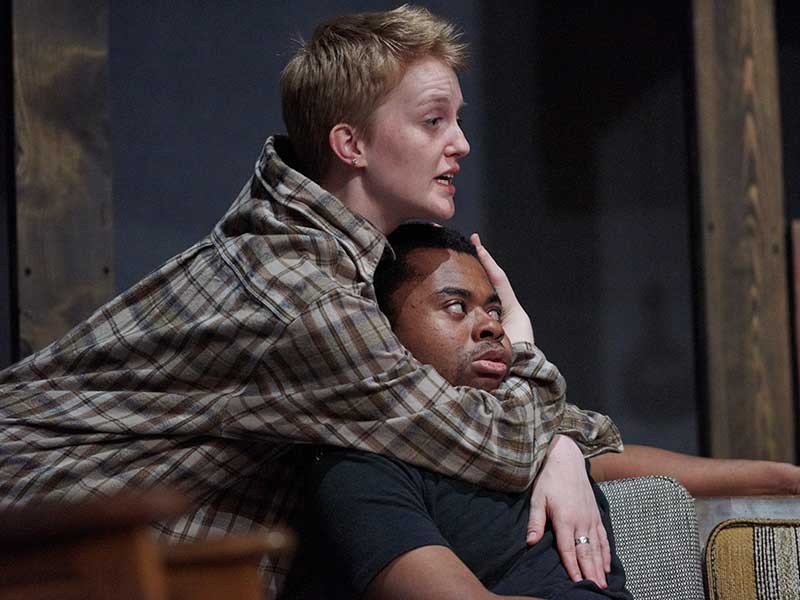 USU actors Molle Barse (Beth) and Alex Smith (Frankie), in the production of "A Lie of the Mind."

A Lie of the Mind by Pulitzer Prize-winning playwright and actor, Sam Shepard, runs for one week only from February 5-9 at 7:30 p.m. at Utah State University’s historic Caine Lyric Theatre in downtown Logan. There is an additional matinee February 9 at 2 p.m.

After a severe incident of spousal abuse, two families' lives are altered until the final collision point at an isolated cabin. The families are linked by the marriage of their children, Jake and Beth. Beth is recuperating at her parents' home after Jake's abuse sends her to the hospital. A Lie of the Mind explores the families' dysfunction and love as they deal with Beth's brain damage and follows Jake on his search for meaning in his life.

“Sam Shepard is one of the most significant 20th century playwrights,” Adrianne Moore, head of the Department of Theatre Arts in the Caine College of the Arts and director of the show, said. “We’re doing this as a celebration of all of his incredibly wonderful writing.”

Moore said the show is a raw and gritty play, but without on-stage violence. A Lie of the Mind is a show teenagers and adults will enjoy.

One of the difficult aspects for actors in the show is discovering anger in themselves and investigating the emotional aspects of being a violent person.

“You can abhor the crime and still find the character who is the perpetrator interesting,” Moore said. “It would be easy for us to dismiss the perpetrator as only a ‘bad guy,’ but he’s also a multifaceted character that the audience needs to meet.”

The relationship between Jake and Beth is complicated, according to Moore.

“They have an intense yearning for each other,” Moore said. “Part of you wants Beth to get rid of Jake, but it’s not as straightforward as that. He is filled with an intense sorrow and seems to be only a shell of a person without Beth in his life. People aren’t behaving in ways that we normally view as politically correct or in ways that are good for them either. It’s painful to see Beth yearn for Jake even after what she has been through. Audiences are used to seeing parent/child relationships and romantic relationships in theatre and film where things fall apart, but sibling relationships are typically not focused on as much. In A Lie of the Mind, the sibling relationships are quite fraught, but also close, detailed, adult relationships. A Lie of the Mind is often called one of Shepard’s most important plays."

“It’s beautifully written,” Moore said. “It’s not super light, but it’s the intricacies of the way we relate to the people we’ve grown up with and know incredibly well. There’s no strangers in this show.”

Tickets for A Lie of the Mind are $13 adults, $10 seniors/youth, $8 USU faculty/staff and free for USU students with ID. For more information or tickets, contact the CCA Box Office in room L101 of the Chase Fine Arts Center on USU’s campus, call 435-797-8022, or go online to cca.usu.edu.