Nitrogen pollution from fertilization and fossil fuel emissions has become a growing environmental challenge, with the amount of nitrogen moving through ecosystems doubling over the past 50 years.

While nitrogen is essential for growth, too much in natural systems may be too much of a good thing. A major consequence of excessive nutrient availability is biodiversity loss.

But two impacts controlled by humans — being fertilized and being eaten by herbivores — can combine to promote biodiversity says Utah State University ecologist Peter Adler.

With colleagues from multiple institutions participating in the Nutrient Network or “NutNet,” as the cooperative research network is known, Alder published findings from experiments conducted at 40 sites on six continents in the March 9, 2014, early online edition of Nature.

“This is exactly the kind of question NutNet was created to answer,” says Adler, associate professor in USU’s Department of Wildland Resources and the USU Ecology Center. “Individual case studies show idiosyncratic effects of grazing on plant diversity, but this coordinated global effort reveals a consistent pattern.”

Comparing data from the study sites, the researchers found fertilization reduced the number of plant species in the plots as species less able to tolerate a lack of light were literally overshadowed by fast-growing neighbors. On both fertilized and unfertilized plots, where removal of vegetation by herbivores increased the amount of light that struck the ground, plant species diversity increased. These results held true at grassland sites in such places as Minnesota, Argentina and China, with herbivores as diverse as rabbits, sheep and elephants.

“Biodiversity benefits humans and the environments that sustain us,” says Adler’s NutNet colleague Elizabeth Borer of the University of Minnesota, lead author on the paper. “What our study suggests is that fertilization and grazing, which are ubiquitous globally, dovetail with changes in light availability at the ground level, and that appears to be a big factor in maintaining or losing biodiversity in grasslands. In short, where we see a change in light, we see a change in diversity.”

A 2011 recipient of the National Science Foundation’s Faculty Early Career Development “CAREER” Award, Adler is one of six founding members of NutNet, which was established in 2005. The network is supported by the NSF Research Coordination Network program. 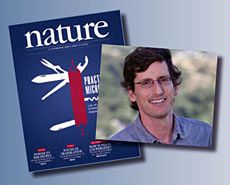 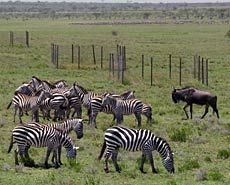 : Zebras and a wildebeest graze near experimental enclosures at a NutNet-affiliated study site in Tanzania. Photo by T. Michael Anderson and T. Morrison.