Imagine, 500 million years from now, future intelligent life forms unearthing your fossilized, flattened skeleton and, without the benefit of images of you or any other human, trying to determine what you looked like.

That’s similar to the task before Utah State University student Michael Strange, who is investigating a tiny creature that inhabited Utah between 550 million and 250 million years ago. He’s among a group of USU students presenting to Utah legislators Jan. 31 during the state’s 2013 Undergraduate Research Day on Capitol Hill in Salt Lake City.

“Using a macro lens, I capture photos of the fossils that expose traces of soft tissue,” says Strange, who conducts research with faculty mentor Dave Liddell, professor and head of USU’s Department of Geology.

“I usually submerge the fossil in alcohol or water to make the details more visible,” he says. “Lighting is the biggest issue. You have to get the right intensity and the right angle.”

In his images, soft tissue appears as a light brown color.

“I use a graphics editing program to convert the soft tissue color to bright red, which makes it pop out and easier to see and interpret,” Strange says.

To the naked eye, hyolith fossils reveal a cone-shaped conch — a few centimeters long — that housed the animal. Two whisker-like appendages called “helens” (hee’ lens) that protrude from the rounded opening of the hyolith’s shell may have helped the creature propel itself.

But Strange’s FCT process has uncovered a new finding about hyoliths: masses of soft tissue, not visible in any other known images of the creatures, surround the ends of the helens.

“I suspect this tissue might be remnants of the animals’ respiratory organs,” he says.

Strange collected many of the fossils on his own, hiking high into Cache Valley’s steep Wellsville Mountains to explore the Spence Shale, a part of the Langston Formation.

“Field collection is a lot of fun, except in the middle of July when temperatures exceed 100 degrees,” he says. “But that’s how field work is.”

Strange, who plans to pursue a doctoral degree in paleobiology, adds he’s fortunate to work with Liddell who “knows more about the Spence Shale than anyone and is always ready to lend a hand or answer a question.”

In addition to his research, Strange, who is the recipient of the geology department’s Clyde T. Hardy and Peter T. Kolesar scholarships, is helping the department develop its geological museum, which will eventually open to the public. Among its recent acquisitions is a giant clam fossil discovered in 2012 by paleontologists from USU Eastern.

“I hope to continue doing research and possibly pursue an academic career at a university or museum,” says Strange, a Cache Valley native who graduated from Sky View High School in 2009. “USU has been great. I really like it here.” 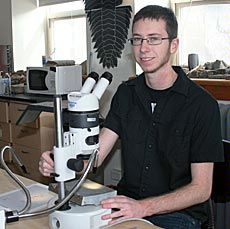 USU geology student Michael Strange is among Aggies who will present at the 2013 Undergraduate Research Day on Utah's Capitol Hill Jan. 31 in Salt Lake City. 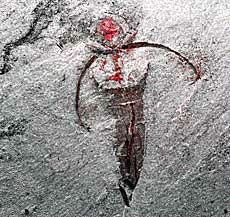 Image of a hyolith fossil processed by Strange using a technique he developed called 'False Color Treatment.' Red areas indicate traces of soft tissue including never-before-seen masses around the ends of the two appendage-like ‘helens.’