Four Utah State University faculty participated recently in the Inaugural Professor Lecture Series, a program coordinated by the provost’s office and hosted by President Stan Albrecht and First Lady Joyce Albrecht. Speakers in the series are recently promoted full professors who present a lecture that highlights their research, creative activity or teaching career at the university.
The most recent speakers were professors Chris Call, Anthony Chen, Janis Boettinger and Kim Corbin-Lewis.

Chris Call
Chris Call, a professor of Wildland Resources, presented the lecture titled “My Long and Winding Road to Professor,” which addressed the development of his research, teaching and service roles over the past 23 years at USU.
Call grew up in a military family, living in Minnesota, Alaska, Massachusetts, California, Indiana and Libya by the time he was 13 years old. Living in Libya allowed him to travel across the Mediterranean to Europe several times. On one trip to Italy, he saw Winston Churchill, Pope John XXIII and Sophia Loren — he was most impressed with the latter.
Call received a bachelor’s degree in plant, soil and water science from the University of Nevada, Reno, a master’s degree in horticulture from Oregon State University, and a doctorate degree in range science from USU.
Call first served in a faculty position in the Range Science Department at Texas A&M University, where being an Aggie is taken very seriously. Although it was a great academic experience, Call never fully adjusted to the flat terrain, heat and humidity and fire ants. After six years at Texas A&M, Call returned to the Range Science Department at USU in his former major professor’s position. Over the past 23 years at USU, Call has taught more than 2,600 students in 10 different courses, served as a major professor for eight doctoral students and 22 master’s students and conducted research in Pakistan and Iceland, and in more exotic locales, such as Skull Valley, Utah, and McDermitt, Nev.
Call met his wife, Noelle, when he was an instructor and she was a graduate student at the University of Nevada, Reno. They have a son and a daughter. Their son Andrew just started his master’s program in the Environment and Society Department at USU. Their daughter Megan is in the final year of her doctoral program in counseling psychology at the University of Utah. Megan’s husband, Josh Steffen, is in a post-doctoral position in molecular biology and genetics at the University of Utah.

Anthony Chen
Civil and Environmental Engineering professor Anthony Chen presented “Networks: a multidisciplinary paradigm” as his lecture topic, explaining how networks involve engineering, applied mathematics, social science and computer science. In this lecture, Chen discussed how he applies networks to teaching and research, and he highlighted some achievements over the past 11 years. He is also head of the transportation systems engineering program.
Chen was born in Saigon, Vietnam, (now Ho Chi Minh City). He and his family left Vietnam as refugees and immigrated to Los Angeles in 1979. Chen grew up in southern California and attended the University of California at Irvine, where he was awarded his bachelor’s (with magna cum laude), master’s and doctorate degrees in civil engineering in 1992, 1994 and 1997, respectively.
Before joining USU in 1999, Chen was a research fellow at the Hong Kong University of Science and Technology and a postdoctoral researcher at the Institute of Transportation Studies at U.C. Irvine. His primary research was network modeling and its applications to transportation and logistics. He was responsible for the development of a new reliability measure to assess the capacity reliability of a degradable transportation network.
Based on this innovative work, Chen received a Faculty Early Career Development Program grant from the National Science Foundation in 2002.
Chen is also very active in international research. He is a frequently invited visiting professor for several universities in China, Hong Kong, Korea and Thailand. In the 2006-2007 academic year, he spent the first semester of his sabbatical at the University of Seoul in Korea and the remaining time at Chulalongkorn University in Thailand.
Most recently in the summer of 2010, he visited and delivered lectures at eight universities in Hong Kong and China, including the Hong Kong Polytechnic University, University of Hong Kong, Beijing Jiaotong University, Beihang University, Tsinghua University, Southeast University, Nanjing University and Tongji University.
Kim Corbin-Lewis
Professor Kim Corbin-Lewis gave her inaugural lecture titled “Dysphagia:  Food for Thought.” Corbin-Lewis is the Communicative Disorders and Deaf Education department head.
Corbin-Lewis began her trek west from the Atlantic side of the country — in Port Washington, N.Y. Her parochial education began at St. Peter of “Alcatraz,” as she and her friends called it, and progressed to St. Mary’s Girls High School. Corbin-Lewis earned her bachelor’s and master’s degrees at Loyola College in Baltimore, a Jesuit liberal arts school.
After working as a speech-language pathologist in New Brunswick, Canada, for seven years and a year at the Universite de Savoie in France to contemplate her future, she finally left the Catholic higher education system to earn her doctorate from the University of Wisconsin-Madison. Corbin-Lewis met her future husband there, and they spent their first date at the medical school, hovering over the cadaver she was dissecting.
While her perception of the United States matched the famous New Yorker cover (showing Manhattan and then skimming over everything else west), she found her home on the “dark” side of the Mississippi. She has enjoyed living in Utah since 1989 and married David Lewis in 1990. David and Kim are the proud parents of two adventurous teen daughters — Danica, a freshman at Knox College in Galesburg, Ill., and Alexandra, a sophomore at Logan High. Kim, David and the girls take every opportunity to explore exotic parts of the world together.
Janis Boettinger
Professor Janis Boettinger presented “It’s a dirty job — and the best on the planet!” detailing her experiences leading to becoming professor of pedology in the Plant, Soils and Climate Department at USU.
Boettinger was born in Passaic, N.J. Throughout her childhood and young adulthood, the family lived in Saddle Brook, N.J., where she and her sister were raised to believe they could grow up and do anything with a college education. Her father loved boats and the Jersey shore, so he took his family boating, crabbing and fishing — as long as the kids learned to bait hooks and clean fish. The family spent vacations on the move, traveling by car as far as Canada, and by plane to California and Arizona, infecting Boettinger with a wicked travel bug.
She went away to college in upstate New York, earning a bachelor’s degree in environmental technology at Cornell University. Along the way, she worked as an undergraduate teaching assistant, was involved in undergraduate research, competed on the Cornell Soils Team and was president of the Cornell Agronomy Club.
Following a temporary position mapping soils on the Soil Survey of St. Lawrence County, N.Y., Boettinger moved across the country to begin graduate study in soil science at the University of California, Davis. Her master’s research on soil development in the Mojave Desert gave her the confidence to travel to Queensland, Australia, to conduct field research for her doctorate. Whereas her master’s program was funded with an assistantship, she funded her Australian adventures and UC Davis doctoral program with a competitive fellowship, many teaching assistant jobs (she figured she could teach anything if she needed the funding) and as a self-employed environmental consultant.
In late 1991, her “dream job” at USU was advertised. Janis was appointed assistant professor in 1992, filling the faculty position previously held by her major professor’s father. She was promoted to associate professor in 1998 and to professor in 2007.
Writer: Max Dahl, 435-797-1350, m.p.dahl@aggiemail.usu.edu 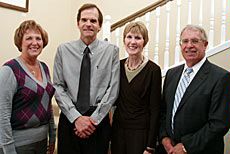 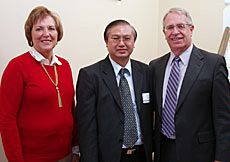 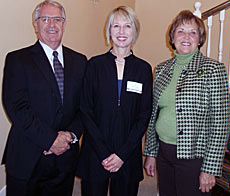