The phrase “getting your hands dirty” is something a group of Utah State University students is all too familiar with. The students travelled to Missouri in April to compete at the 2009 National Collegiate Soils Contest sponsored by the Soil Science Society of America and placed fourth out of 24 in the group competition.
USU students Lars Christensen, Brook Fonnesbeck, Teresa Hole and Melissa Jackson, along with mentors John Lawley and Janis Boettinger, qualified for the national competition after placing second in the Northwest Regional Soils Competition held in Oregon in fall 2008.
The students prepared for the contest with their coach Lawley, a research associate in the Plants, Soils and Climate Department, and Boettinger, a professor of pedology also in the Plants, Soils and Climate Department.
While studying and being able to identify many different types of soil may not seem important, the USU students all agree that the study of soil is important and, in fact, a basic necessity of life.
“It is important to be able to identify and classify soil for a variety of reasons, but I think the biggest reason is for soil management practices,” said Hole, an environmental soil and water science major. “Knowing the type of soil, and its distinguishing characteristics, helps determine what crops will grow best, or if it is a stable place to put a road or a building.”
Lawley echoed that sentiment and said soil is a precious commodity often overlooked and taken for granted. It is a vital part of every living organism and is a medium for which plant and human life exist, he said.
Lawley’s role as team coach was to make sure the students are trained in all aspects of soil judging and to work with them to understand the characteristics and classification of the soil. The team met once a week during the school year and would often go into the field to study and analyze soil pits.
“The competition required us to use the knowledge we gained in classes and through hands-on field work to describe and then correctly identify soils that were previously classified by professional soil scientists,” said Fonnesbeck, an environmental soil and water science major and a civil and environmental engineering major. “This made the competition difficult because different organizations and people use various methods for classifying types of soil.”
The United States covers a vast amount of diverse land, all affected by vegetation, geology, climate and time, and with that comes diverse soil. The contest allowed the students to see the diversity of soils and the diversity in how people in other areas of the United States learn about soils. The contest also made the students realize how diverse the study of soil science can be and what career possibilities include.
“For me, being able to identify and describe soils is important for interpreting the depositional history of an area of land and its relationship to archaeological record,” said Jackson, a geology major emphasizing in geoarchaeology who plans to earn a doctorate in environmental climate change while furthering her research on geology and archaeology.
Hole plans to continue on to graduate school and would like to work for the Environmental Protection Agency or U.S. Department of Energy to clean up super fund sites.
Fonnesbeck would like to be a soil scientist or conservationist and help farmers figure out ways to use soils for the best benefit of society.
“What the students learned in the competition helped the team gain greater knowledge and will help them in their future careers,” said Lawley. “By learning to work together, the students were able to recognize each other’s individual strengths and then use those strengths to their advantage during the competition. This, I believe, is what helped them place fourth in the competition.”
The National Collegiate Soils Competition is held annually every spring and is hosted by a different university each year. The Soil Sciences Society of America sponsors the event and is a progressive international scientific society that fosters the transfer of knowledge and practices to sustain global soils. The society provides information about soils in relation to crop production, environmental quality, ecosystem sustainability, bioremediation, waste management, recycling and wise land use.
For more information about USU’s Plants, Soils and Climate Department and its various study offerings, visit the department Web page. Competition information is available at its Web page.
Writer: Maren Cartwright, (435) 797-1355 , maren.cartwright@usu.edu
Contact: John Lawley, (435) 757-8117, john.lawley@usu.edu

USU students Brook Fonnesbeck, Melissa Jackson, Teresa Hole and Lars Christensen (from left to right) placed fourth out of 24 in the group competition at the 2009 National Collegiate Soils Contest. 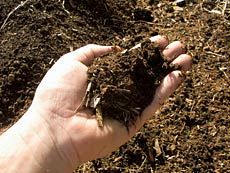 The National Collegiate Soils Contest is hosted by a different university each year and is sponsored by the Soil Science Society of America.