Getting the Most out of House Traditions

In an apartment on Darwin Avenue, students gather as the musician plays a piece on his flamenco guitar. They sip herbal tea through filtered straws, enjoy a casual atmosphere and even further their love lives as part of a weekly custom known as Music and Mate Monday.

This and other traditions are becoming an integral part of USU’s social atmosphere. In many locations around campus, students meet regularly to attend these gatherings.

David Steiner, a senior majoring in economics and Spanish, holds Music and Mate every Monday at his home known as the Blue Light House.

Each Monday there is a musical spotlight in which a few numbers are played while mate is served. Cellos, pianos, guitars, electric guitars, flamenco guitars and violins have all made appearances. Rap music has been featured too, Steiner said. “We try to have a variety in our music,” he said.

The underlying purpose of the event is to bring people together.

“Music and mate is a really casual atmosphere where it’s easy to have conversation,” Steiner said. “When it was first started two years ago, the point of it was trying to get people to meet other people. The culture rooted around mate in South America is spending time together and talking to each other, and we try to bring some of that here.”

Steiner said in the spirit of inclusiveness, everyone’s invited.

“Mate Monday is by no means exclusive,” he said. “Anybody is welcome to come chat and hang out.”

While most in attendance meet new people, some find romantic interest.

“We have set people up a few times,” Steiner said. “We’ve invited two different people we wanted to hook up, casually introduced them to each other and tried to get them to exchange numbers.”

“SigEp Sunday started so people would get over the fear of going to a fraternity house,” Taylor said. “We wanted people to see that it’s just fine and that they can come have a fun time and meet other people.”

Every Sunday, the SigEp boys make a dessert for their guests. Ice cream sundaes are often the go-to choice, but cookies and brownies are known to be in the mix as well.

“The number of people in attendance varies from week to week, but we usually have a solid 30-plus people,” Taylor said.

Taylor said inspirational quotes and interesting stories are read. The Larry H. Miller biography has been quoted, as well as passages out of the Quran and Gandhi enlightenment.

“This Sunday tradition is something that will continue on,” he said. “We will keep having SigEp Sundays now and in years to come.”

West, a senior majoring in psychology, said the treat each week is always different.

When Treat Night first began, West and his roommates shouldered the responsibility of preparing treats each week. Now, whoever wants to make the treats can do so.

“This year we’ve been having volunteers make the treats because it got too expensive to make it ourselves every week, especially with the big turnout we’ve been getting,” West said.

Although the event is focused on treats, West and his roommates have paper and markers laid out on a table to encourage people to draw pictures. At the end of the night, some of these pictures may make it to the already covered walls of drawings done by Treat Night attendees.

“We are a little more selective these days with the drawings put on the wall since it’s gotten so full,” West said. “They have to be particularly good to get put on the wall.”

“It’s just a real good time,” he said. “We just enjoy doing it and like having a lot of strangers come over and meet other strangers.”

In an effort to promote Treat Night, West said they have a Treat Night Facebook page.

“We have 135 people in the group right now,” he said. “We pretty much invite everyone we see.” 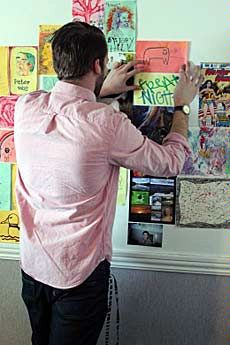