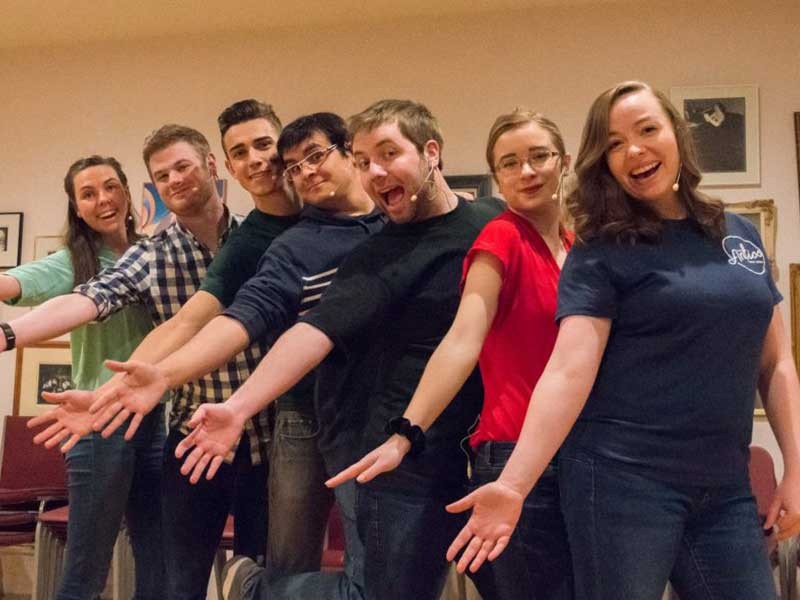 No script and no rehearsal are the ingredients of The Antics Comedy Improv show. The local comedy group performs at the Dansante Theater every Friday, making audiences laugh with their witty and unexpected humor.

The group began as a Utah State University club. Members felt they were good enough to perform for live audiences and took the club to the big stage. This has allowed them to interact with the community and create an audience that keeps coming back for more.

“No two shows are alike. This is one of the few forms of entertainment that involves the audience to make sure everyone has fun,” Calderwood said.

At The Antics’ show, audience participation is the driving force. A typical show consists of the audience offering a topic and the cast basing an entire scene off it.

Since 2008, Antics has provided the community with fun, family friendly improv shows every friday night of their season, at the Dansante Theater in downtown Logan

Alyssa Landrosche, theater education major, said, “It is fun to see them break out of their shell and experience the magic and fun of improv.”

The cast also explained that they have several games they regularly play with the audience, one of which is called “a musical day in the life.” The Antics choose an audience member and recreate their day as a musical. Landrosche said it is always hilarious and unexpected.

The cast also said they have began getting recognized by audience members in public. Brad Melville, social studies composite teaching major, appreciates this taste of fame.

The Antics are a nonprofit group and all ticket sales from their show go towards putting on the next one. It is not about the money, but rather the member’s love of improv.

Andrew Davis, Antics member, said he used to dislike improv. It wasn’t until he went to a show and tried it out for himself that he discovered how fun it was.

“It is about instilling and improving confidence in yourself. When you are on stage and you are in character, you have nowhere to hide. You are that character,” Davis said. “It’s amazing what going out there can do to change yourself. It is a life skill that can help you find yourself and come out of your shell.”

Other members of the Antics also agreed that improv has taught them skills that they have found useful in everyday life. Callie Lythgoe, costume design major, explained that through improv, her confidence had been elevated.

“My confidence in every moment has increased, especially in times when you need to be ready to answer a question. That skill has been tremendously useful and I love cultivating it,” Lythgoe said.

The Antics are an open group and they encourage students to come to their open practices, which are held in the Lundstrom Student Center. If students would rather watch and laugh along with The Antics, they can catch one of their shows Fridays at the Dansante Theater at 7:30 p.m. The Antics said audiences are sure to enjoy themselves and leave laughing.

“If you go, you will not believe how it exceeds your expectations. It’s not funny because we are trying to be funny, it is funny because we understand life is funny,” Davis said. “For anyone who is skeptical, they have to come and see one. The chances are they are going to love it and we are going to laugh right with them.”

For more information about The Antics, visit their Facebook page.