But a study recently published by Utah State University ecologists argues bears are better able to supplement their diet with other quarry than previously thought. The findings, authored by USU doctoral student Dave Iles, his faculty mentor David Koons, associate professor in USU’s Department of Wildland Resources and Ecology Center, and USU master’s student Stephen Peterson; along with collaborators Robert Rockwell and Linda Gormezano of the American Museum of Natural History, appear in the May 15, 2013, online edition of Polar Biology.

The study describes observations made by the ecologists during field research in July 2011 along a remote stretch of the Hudson Bay coast in Manitoba, Canada, where the research team is continuing investigations this summer. The team’s 2011 trip, funded in part by the Delta Waterfowl Foundation, was the first known effort to record polar bear goose hunts in a systematic way. Snow geese are a food source for bears during summer, when the birds have molted and are temporarily grounded.

“During that trip, we recorded bears capturing and eating nine flightless snow geese during six separate hunts over 11 days of observation,” says Iles, a Quinney Fellow in USU’s Quinney College of Natural Resources.

This may not seem unusual, but prevailing thought holds a 700-pound bear won’t pursue a 4-pound goose, if it has to expend more calories than the feathered dinner would replace. Polar bear specialists have reasoned the large mammal would need to make its kill in less than 12 seconds to make a profit.

But Iles and colleagues observed bears chasing fowl an average of 25 seconds; more than double the amount of time supposedly needed to make the hunt worth their while.

“We think there are a couple explanations for this,” Iles says. “For one thing, most of the hunts were by adolescent, and therefore smaller, bears able to expend less energy.”

The second reason is more intriguing because it reveals new insights about the bears’ hunting behavior: The scientists noted most of the chases took place in shallow water.

“It appears the bears deliberately drove the birds into the water, which gives the bears an advantage,” Iles says. “Geese can’t swim as fast as they can run.”

The water appears to provide an added benefit: it cools the bear, thereby reducing the expense of the hunt.

“What this tells us is polar bears may be adapting to climate change more successfully than previously thought,” Koons says. “It’s possible an increased summer diet of geese will enable at least some bears to weather a shortened seal-hunting season. It’s a question that needs more observations and study.” 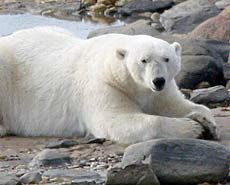 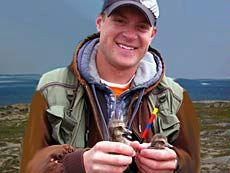