Take a look around and you might be surprised by how many things are made of plastic. Paints, adhesives, prostheses, brushes and furniture name just a few. Since plastic was created about 150 years ago, it has become one of the most commonly manufactured materials in society. About 200 billion pounds of plastics are produced annually worldwide.
Libbie Linton, a Utah State University senior majoring in biological and irrigation engineering, has been researching bioplastics as an alternative to conventional plastics since 2004.
Finding alternatives to petroleum-based products such as plastic will help to increase sustainability. In the United States alone, some 60 billion pounds of plastics are discarded annually, and more than 90 percent of the waste is not yet recycled.
Bioplastics could easily be substituted for regular plastics because they can be molded and the strength can be adjusted just like regular plastics, Linton said. Bioplastics are biodegradable and aren’t derived from oil, making them a much more sustainable product.
“When I began working with Libbie the summer before she started college, she really dug into the details of the organisms, processes and previous research by others concerning bioplastics,” said Ronald Sims, head of the Biological and Irrigation Engineering Department. “By the time she started college, she was well into research and discovery in the laboratory.”
Bioplastics are made from a compound called polyhydroxyalkanoate, or PHA, she said. Bacteria accumulate PHA in the presence of excess carbon source, similar to how humans accumulate fat deposits on their bodies after consuming excess food.
The major problem with producing bioplastics on a large scale is the cost associated with producing them. Presently, bioplastics are around 2.5 times more expensive than plastics produced from oil, Linton said. But as the cost of oil increases, that gap gets smaller and smaller.
The sources for the production cost include the carbon used to help bacteria produce PHAs, the purifying process and operation costs, such as tanks to house PHA-producing bacteria.
Linton’s project focuses on ways to eliminate or reduce one or more of these costs. To make this green idea even greener, she aims to optimize naturally-occurring environments and use byproducts from other production processes.
During her junior year, a research group Linton was affiliated with was awarded a grant from the Utah Science, Technology and Research (USTAR) initiative for the study of biodiesel produced from algae.
Anaerobically-digested dairy waste is used to grow the algae used for biodiesel production. Bioplastic production can be integrated into this process by using the carbon- and nutrient-rich dairy waste to harvest PHA-producing organisms that occur naturally in the dairy waste.
“Using wastes to make bioplastics solves two problems at the same time,” Sims said. “It provides sustainable waste treatment and avoids polluting the environment. Second, by adding a high-value product like bioplastic to the biodiesel production process, the cost of both products can simultaneously be lowered.”
Linton has developed and validated a method for quantifying PHAs in a sample and has successfully detected PHA-producing bacteria in the waste.
Now, we have to look for ways to optimize this partnership between biodiesel and bioplastic production to get a lot of PHA for a good price, she said.
“If there’s anything I’ve learned while working on this project, it’s that everyone has to work together,” Linton said. “No one can know everything, so you have to team up with experts from various disciplines to get the best results.”
During the 2008 USU Undergraduate Research Week poster display, Linton claimed the award for “Best Poster” in the engineering category. She has also presented her research at national conferences, including the Inland Northwest Research Alliance Conference in Big Sky, Mont., in 2005, the Institute of Biological Engineering in Tucson, Ariz., in 2006, the Institute of Biological Engineering in St. Louis, Mo., in 2007, and the Institute of Biological Engineering in Chapel Hill, N.C., in 2008.
Linton plans to stay at USU to get her master’s degree while continuing this research with Sims.
“I’d like to shift to a systems integration emphasis for my master’s degree,” Linton said. “I want to design a system for bioplastic production that can be incorporated into the commercial agricultural waste treatment process without compromising biodiesel production.”
Writer: Annalisa Fox, 435-797-1429, annalisa.fox@usu.edu 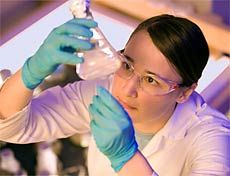