By Katherine Lambert in The Utah Statesman, Thursday, October 30, 3014

On a campus haunted by history, students don’t have to look far for ghost stories steeped in Utah State University tradition.

The Kappa Delta sorority may house more than just the living. Lights flickering, doors slamming and items moving on their own have all been attributed to the house ghost, Patty.

“She just likes to mess with people, but it’s always ‘don’t be stupid’ kind of stuff,” said Kasidie Hill, a Kappa Delta member and junior in family and consumer science. “Like if anyone is gossiping, like being snotty, that’s when the lights start to flicker. If anyone is rolling their eyes during meetings, that’s when the light start to go off. She just likes to keep us in line and make sure everyone follows the rules.”

How Patty died and came to haunt the house are unclear, Hill said, though it’s believed she didn’t die in the house. Rather, residents of room 13 have shared the same dream of a girl in a white dress trying to enter the house.

“Everyone in room 13 thus far, at least one girl a year, has had this dream where this girl in all white is just coming,” Hill said. “Like standing on the tree branch outside, trying to get into the window. It’s not a scary dream, like nobody wakes up scared; it’s just she’s always trying to get into the house.”

Believed to be a benevolent ghost, Patty is known to wander the house at night, often checking on the girls.

“Both of my roommates will go to sleep around midnight, and I’ll come home around one,” Hill said. “I will close the door, push hard because with our door you push really hard to close it. I’ll walk around my bed, put my pajamas on, the door will open. It’s always creepy when it opens because it opens real slow. And I’m like, ‘Patty! Get out!” and she will slam the door.”

The supernatural fun isn’t reserved exclusively for girls. The Phi Kappa Alpha fraternity house has their tale of the Eternal Brother, John Levi Liechty. According to a special collection document authored by former Phi Kappa Alpha member, Ernest Cooper, Liechty died in a car accident outside the fraternity house. In the document, Cooper wrote of his own experience when he was about to sleep through his final exam, but awoke to what he thought was someone singing in his room. Cooper believed it was Leitchy, because the singing stopped when he woke to find the room empty.

Whether or not actual ghosts reside in USU sorority or fraternity houses, the stories tie students together, said Randy Williams, curator of Fife Folklore Archives.

“That’s the beauty of folk culture,” Williams said. “We shape and we utilize legends and stories to help us culturally understand the world around us. People come back and told them about these stories to create connections over time.”

Organ music drifting from inside Old Main or piano music echoing through the Caine Performance Hall may indicate the presence of two musicians still practicing for performances that will never be.

Thurza Little, a talent pianist, would often play “Rhapsody in Blue” on the grand piano in the college auditorium. However, a USU special collections report, “The Local Legends of Logan, Utah,” tells how Little died of a rare, unnamed disease before graduating. Still, “Rhapsody in Blue” has been heard playing in the performance hall when no one is there.

“People reported that they will hear piano music in the middle of the night, coming from the performance hall,” said Lynne McNeill, a folklore instructor and faculty adviser of the USU folklore society. “Still playing, still practicing for the graduation that she will never get to have.”

A similar story describes a woman, her name unknown, destined to play the organ at the senior prom, according to “The Legends of Logan, Utah.” According to the special collections report, the unnamed woman would practice in the Old Main bell tower. Though she never performed her piece while alive, organ music can be heard coming from Old Main on graduation night.

Campus ghost stories do more than make students reluctant to look at Old Main at night, McNiell said. Hidden in the stories is the fear of not progressing beyond college.

“The college experience is meant to be one step on a path to somewhere else,” McNeill said. “This is meant to be a time of learning and growth and evolving and growing up and getting educated, and they you move on from this and you are prepared for whatever’s next. I think in a lot of campus ghost stories you see the fear of not being able to move on. Of being trapped in a limbo of almost adulthood.”

It began on March 22, 1889. Julia Emelia Cronquist’s twin boys, Olif and Oliver, died the same night. Five years later, another child died, Lilean, who was only an infant. Seven years later, two more children died. Cronquist, unable to cope with the deaths of her children, would often go to their graves and weep. When she died, her husband Olif had a statue of a kneeling woman built to honor her.

“The belief is that if you show up to that statue at the right time you will see that she is crying real tears or sometimes tears of blood,” McNeill said. “People try to make this happen by going at the ritual times. You can go at midnight, on a full moon, on Halloween. If you stand around the statue, you know, make a circle around the statue with your friends and say ‘weep, woman, weep,’ or ‘cry, lady, cry,’ she will begin to actually cry real tears, and it’s kind of creepy actually. I think they just cleaned it so it might not show up as well, but it’s pretty evident that there’s water staining all around her eyes.”

St. Anne’s Retreat, once owned by the Catholic Church, sits abandoned. However, the tales that the now-empty swimming pool was once the site where nuns drowned their babies, are very much alive.

“The swimming pool up at the retreat is really the epicenter of where it’s haunted,” McNeill said. “Supposedly that’s where a lot of babies were drowned. The story goes that one young nun that was sent to the retreat because she was pregnant didn’t want her baby to be drowned and fought back and ended up being drowned herself. She and ghosts of all these babies that were killed there haunt this area, especially the swimming pool.”

Another ghost, Witch Hekeda, is known to reside in the canyon. The stories of Hekeda’s demise vary. According to “The Legends of Logan, Utah,” Hekeda was said to be a rich, but reclusive woman living alone in Logan Canyon. One night, two burglars broke into Hekeda’s cabin, killed her and stole her money. Another account says Hekeda was tied to a tree and was left to be eaten by dogs.

“You can summon her if you drive up Logan canyon and pull off, I think it is Temple Fork, and what you are supposed to do is get out of the car and take your keys out of the ignition and put them on the roof of your car and say her name three times,” McNeill said. “So you would say, ‘Witch Hekeda, Witch Hekeda, Witch Hekeda,’ and you know she is approaching because you either see a green light or because you see these glowing red lights and those are the eyes of her dogs. So bizarrely detailed, but we have so many records in the archives of people who have seen this happen.”

The purpose of placing the keys on the vehicle’s hood unclear, as is the reason cars often won’t start once the witch is sighted.

“I don’t know why you have to take your keys out of the ignition to summon her,” McNeill said. “Maybe it’s a sign of good faith, because pretty much all the stories say you have from the moment you see her and she starts approaching you to grab your keys, get back in the car and drive away as fast as possible.”

Whether a skeptic or a believer, McNeill said reluctance still remains for many to engage in supernatural beliefs.

“A lot of people, even the ones that don’t believe it, will say ‘better safe than sorry,’” McNeill said. 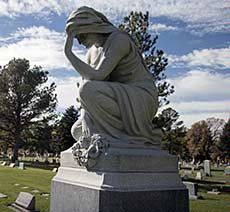