USTAR at Utah State University was designed, in part, to foster collaboration between USTAR faculty and core university faculty to build on established university research areas of strength.

Two USTAR teams, represented by Randy Lewis, of the Synthetic BioManufacturing Institute, and Irina Polejaeva, of Veterinary Diagnostics and Infectious Diseases, worked together to design the goats using genomics technology. Both sets of twins were created with different proof of concept milestones in mind.

Lewis, a member of the Synthetic BioManufacturing Institute at USU, uses transgenic goats to produce milk with spider silk proteins. The proteins are purified and spun into fibers that can be used to create technical fabrics as well as artificial ligaments and tendons. Stronger than Kevlar and more flexible than nylon, Lewis’s spider silk has been used to craft a bullet resistant skin (http://www.youtube.com/watch?v=CYovfqB3ut0) and can be used to create a next generation solution for parachute cords.

Polejaeva, a member of the Veterinary Diagnostics and Infectious Diseases USTAR team at USU, is a cloning pioneer. In 2000 as a project manager at PPL Therapeutics, she and her team of scientists cloned the world’s first pig. Now working with goats — as goats that have been extensively used in Atrial fibrillation research — Polejaeva intends to model and answer questions regarding the nature and progression of the disease.

According to the National Heart Lung and Blood Institute, a division of the National Institutes of Health, “Atrial fibrillation affects millions of people, and the numbers are rising. Men are more likely than women to have the condition. … The risk of AF increases as you age. … However, about half of the people who have AF are younger than 75.”

Robert T. Behunin, vice president for commercialization and regional development at Utah State University, is pleased with the collaboration.

“Through collaborative efforts, both teams have been able to advance their science and achieve milestones more quickly than either team had originally planned,” he said. “The USTAR program at USU focuses on USU’s strength in life sciences. Our core of existing faculty and recent USTAR researchers make projects like this possible.”

About USTAR: The Utah Science Technology and Research initiative (USTAR) is a long-term, state-funded investment to strengthen Utah’s “knowledge economy” and generate high-paying jobs. Funded in March 2006 by the state legislature, USTAR is based on three program areas. The first area involves funding for strategic investments at the University of Utah and Utah State University to recruit world-class researchers. The second area is to build state-of-the-art interdisciplinary facilities at these institutions for the innovation teams. The third program area involves teams that work with companies and entrepreneurs across the state to promote science, innovation and commercialization activities. More information is available online or follow USTAR on Twitter. 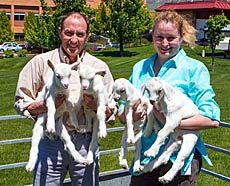 Randy Lewis and Irina Polejaeva with the two sets of transgenic twin goats.