“The study reveals critical information about migratory connectivity for the Marbled Godwit, a species of high conservation concern in the United States and Canada,” says Bridget Olson, a deputy project leader with the U.S. Fish and Wildlife Service, who earned a master’s degree in biology from USU in 2011.

Olson, along with USU ornithologist Kimberly Sullivan and USFWS colleague Adrian Farmer, published findings of what could be the first demonstration of a continental “crisscross” migration pattern in a shorebird in the early online edition of the May 2014 issue of The Condor, journal of the Cooper Ornithological Society.

“Our study focuses on North American populations of the Marbled Godwit, a long-bodied shorebird with a distinctive, two-colored beak,” says Sullivan, associate professor in USU’s Department of Biology. “The Bear River refuge and Great Salt Lake host a high percentage of the bird’s population each year — up to 43,000 birds a day during peak migration.”

The largest of these subpopulations — about 170,000 individuals — breeds in the prairies of the western United States and Canada, Sullivan says. Some 2,000 birds breed in Alaska and another group of about 2,000 breeds in eastern Canada’s James Bay, between Ontario and Quebec.

“We expected to confirm the long-held hypothesis that the breeding population in eastern Canada migrates south along the Atlantic seaboard to wintering areas along the Georgia coast,” Sullivan says. “To our surprise, that wasn’t the case. Instead, birds we tagged in eastern Canada crossed the continent to winter along the Gulf of California in Mexico.”

Further, the researchers noted migration routes of the Georgia-tagged birds crossed over those of the eastern Canada-tagged birds in the mid-continental United States.  Birds tagged at Great Salt Lake also traveled to mid-continental prairies and, contrary to expectations, used an overland route through the southwestern U.S., rather than following the Pacific coast, to wintering sites in Mexico.

“Shorebirds use a ‘hop,’ ‘skip,’ or ‘jump’ migration strategy, referring to distances covered between successive stopovers,” she says. “A ‘hop’ is a short distance; a ‘jump’ a much longer distance. The birds use different strategies depending on resources available at stopover sites.”

What didn’t surprise the researchers, Olson says, is the importance of the Great Salt Lake as a stopover in the birds’ travels. Identifying the shorebird’s staging sites is an important part of developing conservation management plans for migratory species.

“This information helps us know where to focus our efforts,” she says. “It allows us to examine the risks and threats that the species is exposed to at these disparate locations.”

“A portion of the birds’ Utah habitat remains unprotected,” Sullivan says. “The Great Salt Lake, especially portions of the Bear River Bay outside refuge boundaries are vulnerable to mineral extraction development and habitat degradation from municipal and agricultural uses.” 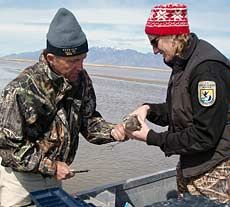 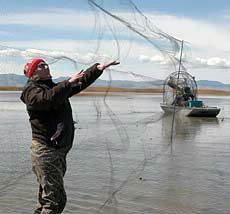 Olson uses a mist net to capture birds for a migratory connectivity study. She published findings of the research, conducted with USU faculty member Kimberly Sullivan and USFWS colleague Adrian Farmer, in 'The Condor.'