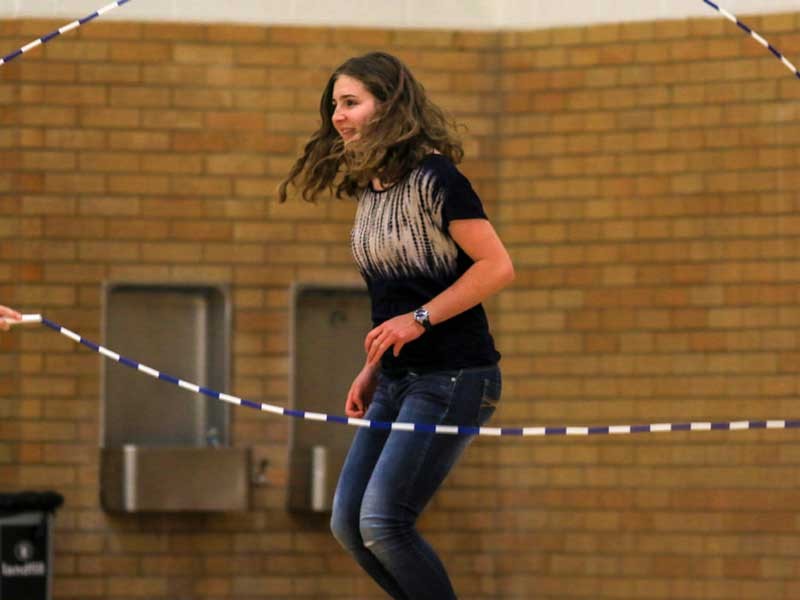 Utah State University Jump Rope Club is promoting fitness and fun through the sport of jump roping. This is the second year the club has been jumping on campus.

Jump rope is a classic playground pastime. This is where many of the club members learned their skills. Haylee Scott, club member, said she couldn’t wait till it was her turn to jump.

“There was always a jump roping team at my elementary school. I had to wait till I was old enough to do it, but I’ve loved it ever since,” Scott said. “I saw these guys at Day on the Quad and was like, ‘I am totally joining, I don’t care what anyone thinks.’”

Mckenzie Scott, club president, and Tembree Hale, club secretary had similar tales from elementary school. They say beginners to the sport don’t have to have any previous knowledge though to be able to pick up jump roping.

“Different people have their different strengths. It depends on what makes sense to them. Most of everyone can do a good deal of the tricks. It just takes that mental capacity and willingness to do it,” Hale said.

For now the team is holding weekly open gyms for anyone to come and try out jump roping. Their practices last an hour and a half and are held in the HPER building. They are looking to began building up towards doing shows.

To start jump roping, new players can began with a basic single bounce. Once that is mastered, then can learn a variety of tricks. The tricks the clubs use in these shows are named after other jump ropers initials. With all the different styles of tricks that they can do, the team says their routine possibilities are endless.

“It’s the most creative sport you can have. We can have music and make our own thing. To get a 10 out of 10 in jump rope is just not there because there are so many possibilities,” Mckenzie said.

For Haylee, she said she likes learning tricks so she can show off to her roomates.

“I’m a visual learner, so I have to watch a trick a few times before doing it myself. It really just depends how much effort and trial you are willing to put yourself through to get a new trick,” she said. “You can kind of brag about it when you learn something new. I always show my roomates my new tricks.”

The club encourages others to come see how to stay fit and learn some single rope and double dutch tricks. To see how to connect with the club visit here.

“We just want to share jump rope with as many people as possible. Don’t be discouraged if it is your first time. The more we can share it with people the better,” Mckenzie said.