While the Jon M. Huntsman School of Business at Utah State University will never be able to make basketball headlines, the school has just been through its own March Madness, going beyond the “sweet 16” to claim an international championship.

The school is celebrating the success of two student teams that have claimed first and second place in a competition sponsored by the Association for Information Systems that drew students from 28 universities and three countries earlier this month.

“It is rewarding when students from around the world enter this competition and we have teams that come out on top,” said David Olsen, head of the Management Information Systems Department. “This bodes well for our students as they enter the marketplace and it keeps the bar high for our department. Leading organizations and companies seek out Huntsman students because they know they will contribute in a big way and they want that competitive edge.”

Huntsman students Allan Follett, Conner Sorensen and Chad Williams, took first place in a contest that required them to create a video about information systems. Their production focused on explaining what the phrase “big data” means and why students who study in this area have increased job opportunities. (Their video can be viewed by doing a search for “I love information technology” on YouTube.)

“We go through our whole education wondering if we are getting better at what we are doing,” Williams said. “We want to know how we’ll compare to the competition when we graduate. So this was a validation for us from a large organization and it was gratifying to know the judges liked what we created.”

Vishal Patel and Divya Reddy competed in the IT security category and took second place. To qualify as finalists they were asked to take on a case study that involved a company with very complex IT problems that wanted to simplify its systems and get a better return on investment.

Patel said the case studies are very similar to the type of complex problems they will face after graduation and that he considers the experience he gained by competing very valuable. He said they spent hours refining his group’s original presentation and the judges told them that they were among the best prepared of any of the students at the event.

The Huntsman students said the competition gave them a chance to showcase their skills on an international stage and to network with top industry officials.

“It’s sort of hard to sell soft skills in a job interview,” Williams said. “Companies want people who can work in a team and this win, which required lots of teamwork, is something we can point to as an example of what we are capable of doing while working with others.”

The contest was part of the AIS 2014 Student Chapter Conference and Competition that was hosted by Arizona State University and sponsored by companies like Walmart and State Farm.

The students are members of the Huntsman AIS student chapter that was recently recognized as an “outstanding chapter” by the AIS parent organization, an honor only four chapters in the world earned last year, according to Timothy McFall, the chapter’s president.

“Our AIS chapter competed with top schools; many of which have substantial budgets and administrative support,” said Susan Jones, Huntsman faculty advisor for the club. “This year’s top honors went to schools like the University of Alabama, University of Georgia and the University of Michigan. Our students can be proud that their hard work has paid off with this recognition.” 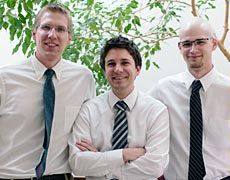 Huntsman students Allan Follett, Chad Williams and Conner Sorensen [from left to right], took first place in a competition sponsored by the Association for Information Systems. (Photo by Nicole Traveller.)