Shelby is widely known in Utah for striking down the gay marriage ban, leaving around 30 other states to follow his lead. The event was organized and put on by Neil Abercrombie, the director of the Institute of Government and Politics (IOGP), and some of his comrades.

“We try to have events like this every semester,” Abercrombie said.

The events are decided by himself and his colleagues. For this event specifically they decided they wanted to have someone with a judiciary role.

The room was filled and people, some standing along the walls to be able to see what Shelby had to say.

Dave Butterfield, a lifelong friend of the judge, was there to introduce him. Abercrombie had prepared some submitted questions and topics for Shelby which allowed the audience to get several different views on his work as a judge.

“I interact with juries all the time and it is my favorite thing,” Shelby said. “I was moved with how well our jury system works to resolve disputes and what a great privilege that is that we enjoy.”

There were many other topics, such as militarizing the police force and whether or not the judiciary would be involved with that or interfere with it. Shelby could not actually give an opinion because he knew no more than the audience on the subject.

“One of the best things about my job is that not only do I not have to engage in discussions like that but I really shouldn’t,” Shelby said. “The judiciary doesn’t make calls, we don’t have any business in the business of making policy. That belongs to our legislators who are elected by all of us.”

As Abercrombie and Butterfield continued to interview Shelby and give him new topics there were many things the judge repeated. He stuck to the constitutional rights and was passionate about it.

Shelby said that there are people that say judges are “dispassionately involved in their cases,” which he says is true.

“It’s a necessity. You do your very best to get the right result.”

A question was asked about the judiciary and their morality and how the judge’s political views may take part in their rulings.

“Our judiciary depends on diversity in our judges,” Shelby said. “One of the reasons I come and speak at events like this, I think it’s part of the judges obligation to make ourselves available so that people can ask us questions like this. One of the things that concerns me is the perception of the judiciary. We are a powerless branch of government. Most importantly we rely on citizens believing in the integrity of our judiciary.”

“I thought it was really good; I think Judge Shelby did a great job of elaborating what federal judges should and shouldn’t take a public opinion about in a public space and I thought it was educational,” said Jessica Beddingfield, a senior majoring in political science. “And he’s definitely a good ol’ Aggie.”

Shelby ended the fireside by describing how humbling it is to exercise his responsibility as a judiciary.

“I did the very best I could so anybody could come and read what I did,” he said. “My views should be transparent in that way.”

“I found Judge Shelby’s non entanglement with politics in his judicial matters as being inspiring,” said Justin Miller, a junior double majoring in political science and economics. “I am glad that our members of the judicial system are doing their utmost to be impartial. I was surprised by how humble he was of his position and the way he acted with charm and poise.” 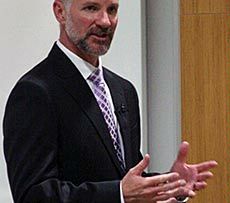