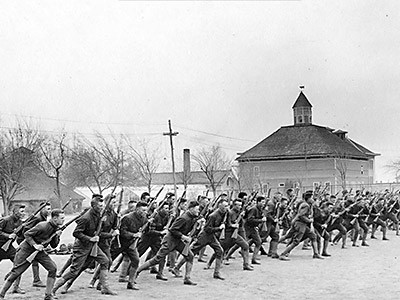 A new documentary follows the long history of Utah State University's Army ROTC, which began well before ROTC itself was founded in 1916. The program thrived through the Great War, as shown in this World War I-era photograph, and continues its successful cultivation of Army officers today. Photo courtesy USU Special Collections.

Whenever cadets in Utah State University’s Army ROTC snap to attention in their early-morning roll calls, they sound off with a phrase that says much about the university’s long rapport with the nation’s military.

“West Point of the West!”

In fact, even before the 6 a.m. shout-out became habit for now-2nd Lt. Camon Davison, the slogan had “piqued” his interest during his search for a graduate program at a university that also offered a strong ROTC program.

Pique led to progress. And the investigation that followed his arrival at USU revealed a side of the school that surprised the young researcher. He didn’t know, for instance, that USU was producing trained military officers for a dozen-plus years before the creation of ROTC. Or that the historic buildings surrounding the Quad — the heart of USU — mostly all come from military origins.

Now he’s hoping to share that information, and plenty more, in the documentary West Point of the West: The History of the Department of Military Science at Utah State University. It’s a long, unwieldy title for a fascinating, professionally made look at eras usually hidden in dusty books.

This week [Aug. 29-Sept. 2, 2016], new Army ROTC cadets learned about their link with the past with a showing of the nearly hour-long film — a showing that Maj. Jonathan Kenworthy, Military Science department head, said will become a tradition with incoming cadets.

The documentary is available for others can watch on You Tube.

A film graduate of Villanova University, Davison came to his USU graduate work in American Studies with a desire to put his video expertise to work.

“The idea was to get my master’s thesis, while bringing awareness to the ROTC program,” he said.

What began as a planned 20-minute presentation with a companion paper grew and grew as Davison realized the scope of this history.

“I had no idea that USU was basically built by the Army,” says Davison of the university’s many historic buildings. Stacks of old photos show thousands of cadets, spanning more than a century, marching on the Quad’s grassy stretches.

The ROTC — Reserve Officers’ Training Corps — this year celebrated its centennial [2016]. USU, however, had a special mandate to cultivate young Army officers well before the ROTC’s launch in 1916 at the start of World War I. USU’s Military Science became a department in 1892, just four years after the school was founded.

At the time, said Kenworthy, the U.S. Military Academy at West Point was unable to keep up with a growing demand for military officers. The Army began to look for “institutions of learning that could produce young officers to take over the capacity the military academy couldn’t.”

As a land-grant institution, USU was called to step up and soon became the largest producer of military officers outside West Point, at times enrolling up to 2,000 cadets at a time.

During World War II, USU trained some 30,000 soldiers and officers. By the war’s end, said Kenworthy, “we had a very large footprint,” earning USU the nickname of West Point of the West.

“Because we got our foot in the door and because we had intelligent young people who were focused and driven and spoke different languages that created all these demographic advantages, the Army saw that niche and grabbed hold of it,” said Kenworthy.

The idea of the documentary was approved by Davison’s thesis committee in the College of Humanities and Social Sciences. His adviser was Brian Champagne, journalism assistant professor, from whom he’d taken a documentary-production class.

Davison spent hours interviewing former USU cadets like Major Gen. Lynn Stevens (Ret.), class of 1958.  But the biggest source of help, he said, was Bob Parson, university archivist with the Merrill-Cozier Library’s Special Collections. Parsons, he said, “was instrumental in getting me on the right track.” A path, that is, leading through “boxes and boxes and boxes” of photos and journals. All in all, the film took 15 months to research, interview, write and edit.

Davison graduated with a master’s in American Studies in June and was commissioned a second lieutenant the same month. He’s been accepted into the Army’s Special Forces, beginning November 2016 at the Army Airborne School at Ft. Benning, Ga. From there, he has his future mapped out. Training at Fort Drum, N.Y., to be an infantry platoon leader, then a post in military intelligence. His final destination, he hopes, will be a history teaching post at West Point itself.

Davison says he’s a first-generation college graduate and grew up in a family that traveled the world with his father’s Air Force career.

His Air Force dad, he said, didn’t quibble when Davison joined the Army.

“More than anything, he was just proud I decided to serve my nation,” he said.

“Utah State has stepped up to the call of the nation more than once,” he said. “I just think that’s really something to be proud of.”

The documentary can be seen online. 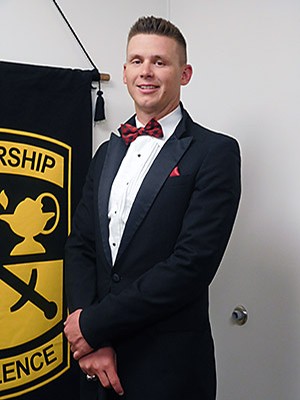 Camon Davison has created a documentary for his 2016 American studies master's degree. The engaging film looks at the history of the Army ROTC at USU, a history that predates even the ROTC itself. Davison was commissioned recently as a 2nd lieutenant and has been accepted into the Special Forces. 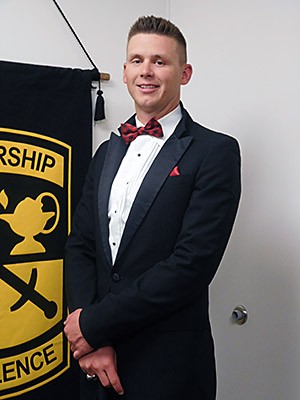