USU professor Thomas Edwards calls his main professional focus the “science-policy interface.”
“I can’t make decisions for public policymakers,” says the self-described applied ecologist, “But I’d like to supply them with the science to make sound choices.”
Too often, elected officials are caught between the demands of extreme ends of the political spectrum, Edwards told family, friends and colleagues who joined him April 4 at the President’s Home for the 17th talk in the university’s 2005-06 Inaugural Professor Lecture Series. The series highlights the accomplishments of university faculty who have been promoted to full professor in the past year.
“One of the things I do is try to provide some measure of science to policymakers, who have to strike a balance between conflicting interests,” says Edwards, who is assistant unit leader for USU’s Fish and Wildlife Research Unit and a faculty member in the Forest, Range and Wildlife Sciences Department in the College of Natural Resources. “If both extremes are throwing rocks at me, I’m probably doing good science,” he says.
Edwards’ experience in advising government officials about ecological matters is extensive.
He was one of five members of a U.S. Fish and Wildlife Service advisory team that, in 1990 under the Endangered Species Act, formally listed the northern spotted owl as a threatened species throughout Oregon, Washington and California.
Edwards was one of two ecologists who drew the boundaries in preparation for the Grand Staircase-Escalante wilderness area’s designation as a national monument in 1996.
From 2002-04, Edwards conducted a study for Edwards Air Force Base in southern California, in which they investigated the impact of flightpaths on growing residential development around the military installation.
He advised former Utah governor Mike Leavitt on a variety of Utah wilderness and biodiversity issues.
Edwards says Utahns still have a chance to protect their state’s precious resources and quality of life, but time is running out.
He cites good tactical efforts that have been made – such as plans for construction of Frontrunner, a heavy rail commuter line for the Wasatch Front – but says more comprehensive, strategic planning is needed.
“Utah is undergoing tremendous growth,” says Edwards. “Unless we take action, the Wasatch Front is going to end up looking like Colorado’s Front Range and Salt Lake City will look like Los Angeles. Cache Valley will look like Fort Collins – uninterrupted concrete and strip malls, along with worsening air pollution.”
Edwards says his interest in ecology and conservation probably developed during the long, winding cross-country car trips he took as child with his family. “My dad was in the military and between our frequent moves we’d load up the station wagon with a camping tent and enjoy the journey.”
By age ten, he’d visited all of the lower 48 states, as well as Mexico and Canada. Edwards spent his teen years in southern California where, as soon as he was licensed to drive, he frequently ventured into the Sierra Nevada mountains.
He earned a bachelor’s degree in wildlife management from California’s Humboldt State University and completed a master’s degree in biology from the University of New Mexico. In 1987, he received a doctorate in wildlife ecology from the University of Florida in Gainesville.
Edwards says that ecology is a misunderstood discipline. “Ecology gets a bad rap because it’s equated with environmentalism,” he says. “Ecology is about the science of understanding why species exist and persist.” 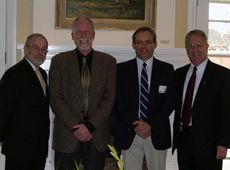 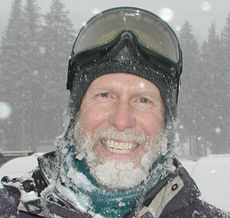 Thomas Edwards was recently honored as an inaugural professor. 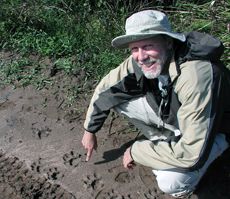 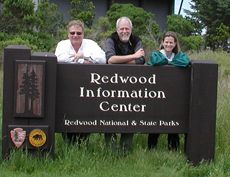