Utah State University professor Phaedra Budy is proud to be an intellectual descendant of the “phylogenetic tree” of celebrated ecologist G. Evelyn Hutchinson. The honor, which includes several of Budy’s mentors, is reserved for select doctoral degree holders.

Budy says Hutchinson, known as “the father of modern limnology (study of inland waters) and modern Darwinism,” was among her inspirations.

“He had such an elegant way of making complex ecological concepts tangible,” says the aquatic ecologist, a faculty member in USU’s Department of Watershed Sciences. “He defined the term ‘ecological niche,’ which refers to a multi-dimensional region of environmental factors that affect each species — an innovative idea.”

Budy shared her professional journey through a talk entitled “Reflections and Inspirations” with family and friends Feb. 22 at the USU President’s Home. Her presentation was the 12th talk in the university’s 2011-12 Inaugural Professor Lecture Series. Coordinated by the Provost’s Office, the series highlights the accomplishments of faculty who have been promoted to full professor in the past year.

Born in Milwaukee, Budy was raised outside of Reno, Nev., where she enjoyed a ‘rough-and-tumble’ childhood riding horses and motorcycles, pursuing water sports and spending most of her free time outdoors. She counted tree rings with her father, a forest ecologist, and accompanied her mother, an anthropologist, on site digs around Nevada.

“We had a lot of books with ‘ology’ around the house,” Budy says. “And though I didn’t think about it at the time, my parents really loved what they did. It was a powerful message.”

She remembers “incredible” science teachers during her high school years and at the University of California, Davis, where Budy spent her undergraduate career and crafted her own independent bachelor of science degree in limnology.

“My father told me about UCDavis-led research at Lake Tahoe and that’s where I spent summers snorkeling and scuba diving as a research assistant,” she says. “It was so much fun, I couldn’t believe it was a job.”

While still an undergrad, Budy met USU professors Chris Luecke and Wayne Wurtsbaugh, who encouraged her to pursue graduate study at Utah State. Little did she know both professors would one day become her colleagues.

“I couldn’t have had better mentors,” she says. “Both professors, along with other faculty members at USU, played a pivotal role in my development as a scientist and a scholar.”

Budy says Luecke pushed her to understand the “whole ecosystem.”

“He’s patient and open-minded — a fabulous scientist with a huge heart,” she says.

“Wayne is a motorhead like me, who loves the outdoors and has such a passion for field work,” she says. “He’s serious about his work but has taught me, by word and action, a valuable lesson: there’s more to life than doing science.”

“It was a great experience — about as good as it gets for an ecologist,” she says. “The tropical site is very ecologically productive and diverse.”

After a few years working with the U.S. Fish and Wildlife Service in the Pacific Northwest, Budy realized she missed academia. When a faculty opportunity opened at USU in 2001, she jumped at the chance.

“The study of fish is a wonderful way to turn undergrads on to evolution and biology,” Budy says. “Most students, unless they’re fishing enthusiasts, don’t have much interest in fish initially. But when they learn about the incredible diversity of these creatures and the cool ways fish have adapted to extreme environments, they become fascinated. It’s a great way to get students involved in research, which provides memorable learning opportunities and gives them a lot of confidence.” 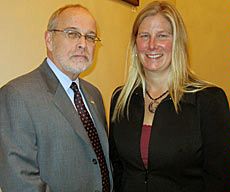 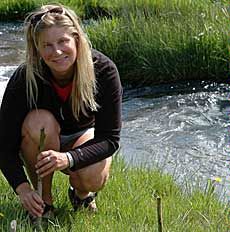 Budy at the research site of a restoration effort along Logan Canyon's Spawn Creek. A professor in USU’s Department of Watershed Sciences, she says research activities instill confidence in students.