During her elementary school years, Utah State University professor Carol von Dohlen confided to her peers she wanted to be a naturalist when she grew up.

“My friends snickered behind my back and I couldn’t understand why,” says von Dohlen, who joined USU’s Department of Biology faculty in 1996. “Then I learned they thought a ‘naturalist’ was someone who lived in a nudist colony.”

“That seemed to calm the uproar,” says von Dohlen, who shared her professional journey through her talk “A Perpetual Student” presented to family and friends Nov. 27 at the USU President’s Home. Her presentation was the third talk in the university’s 2012-13 Inaugural Professor Lecture Series. Coordinated by the Provost’s Office, the series highlights the accomplishments of faculty who have been promoted to full professor in the past year.

Born and raised in Hartford, Conn., von Dohlen says she was “obsessed” with animals and nature and spent most of her free time outdoors.

“I read every book about animals I could find and especially enjoyed Jane Goodall’s ‘In the Shadow of Man,” she says. “I was fascinated with the study of animal behavior.”

By the time von Dohlen finished high school and prepared to enter Dartmouth College, another passion competed for her attention: music.

Ultimately, the young coed concluded she’d rather spend more time outdoors than cooped up in a practice room. Her decision to major in biology propelled her into undergraduate research opportunities in New Hampshire forests.

“I studied songbirds and caterpillars and discovered how much I liked research,” von Dohlen says.

After graduation and six months of hitchhiking around New Zealand, she found a temporary position with the Washington, D.C.-based Conservation Foundation (which subsequently merged with the World Wildlife Fund.)

“My time was spent investigating federal expenditures on ecological research,” she says. “From the experience, I concluded I didn’t want to work for the federal government.”

Her stint didn’t last long but, around the corner from her office, von Dohlen stumbled upon a small organization run by renowned radiobiologist Alexander Hollaender, a founding director of Oak Ridge National Laboratory. von Dohlen was offered a position with the organization, which organized symposia in cutting-edge genetics research.

“It was a very enriching experience and inspired me to pursue graduate studies in biology at the University of Maryland,” she says. “There, I met evolutionary ecologist Doug Gill, who would be a formative mentor.”

At UMD, von Dohlen cultivated her research interests in aphids and other insects; an area she continues to pursue. Her current projects include study of molecular systematics to reconstruct the history of lineages in insects, as well as investigation of bacterial symbiosis in plant sap-feeding insects.

“I have the best job in the world,” says von Dohlen, who serves as co-director of graduate studies in the biology department. “I can’t wait to see new data.”

Beyond the lab, she enjoys teaching.

“I work with amazing undergrads and graduate students and terrific faculty colleagues,” says von Dohlen, who is married to USU vice provost Larry Smith. “I’ve been extremely happy at USU, where I’ve been able to have a life as well as a career.” 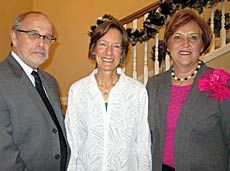 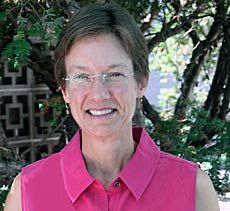 Carol von Dohlen's research includes study of molecular systematics to reconstruct the history of lineages in insects, as well as investigation of bacterial symbiosis in plant sap-feeding insects.