“The path may not seem connected but it has helped me follow my passions, science and librarianship,” said Shrode.

Shrode gave her Inaugural Professor Lecture Series presentation Jan. 8, the fourth lecture of this academic year’s installment. Her lecture, “ABC to Double-D: May not sound like progress, but the journey continues,” described her roots and path to USU.

“ABC stands for Alcoa Bicentennial cloggers. I grew up in Alcoa, Tenn., and was on a clogging team in the 1970s,” said Shrode. “Double d stands for documents deputy because of the new position working with government documents.”

Shrode is transitioning to a new position asGovernment Documents Librarian at the USU Merrill-Cazier Library.

Shrode completed her undergraduate degree in science from University of Tennessee Knoxville, but was hesitant about pursuing the lifestyle of a doctoral student. Shrode’s best friend’s mother insisted she look into librarianship.

“She told me you can do science related work without killing all of those mice and frogs,” said Shrode.

Shrode enrolled in a reference service class at the School of Library and Information Science while working as a University of Tennessee Knoxville research employee.

“It was a pivotal experience to sit in that class, it opened my eyes to the possibilities of a career path with librarians and science,” said Shrode.

Shrode completed the librarian graduate program at University of Texas Austin and took a position as an agricultural librarian at Virginia Tech. After four years she moved back to Tennessee to work as a science librarian for eight years, where she met her husband who was recruited to USU.

“I showed up in Logan, Utah, with no job and started bugging the library. Three months later, a woman left a job in the reference department and I was fortunate to be qualified,” said Shrode.

Shrode has been instrumental in promoting the library, researching a mobile app installment for the library and authored a book about becoming a biology librarian for those without a science background.

“I also write many book reviews so other people in the world, librarian or not, can decide if they want to buy the book for their collection,” said Shrode.

As part of the Merrill-Cazier Library renovation building committee in 2005, Shrode made key decisions and helped her colleagues with the state-of-the-art BARN (Borrowers Automated Retrieval Network).

“The library is a wonderful gathering place for students, and we are happy to have such high traffic,” said Shrode.

With a background in science research, Shrode has worked with many undergraduate honor students’ thesis proposals at USU.

“All science research is useful, even it fails, there is some insight you can get out of it that will help the next person,” said Shrode.

Shrode has taken a new role as an apprentice to John Walters in government documents.

“I have big change moving into government documents and have a lot to learn,” said Shrode. 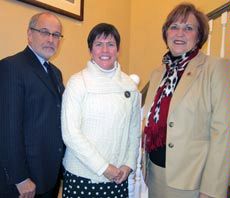