“I desperately wanted a horse,” says Coppock, who joined USU’s faculty in 1991. “But that wasn’t a practical option with our modest apartment.”

The aspiring adventurer developed a strong interest in exploring distant lands; an interest fueled by frequent visits to the local cinema, where Coppock enjoyed movies of Africa and other faraway continents.

“When I was 17, my mother used her scarce resources to surprise me with a trip to Africa — it was a journey that catalyzed my lifelong interest in the ‘Dark Continent,’” says Coppock, who shared his professional journey with family and friends Feb. 26 at the USU President’s Home. His presentation was the 12th and final talk in the university’s 2013-14 Inaugural Professor Lecture Series. Coordinated by the Provost’s Office, the series highlights the accomplishments of faculty who have been promoted to full professor in the past year.

During his first visit to Africa, Coppock was enthralled with the landscapes and cultures. Back in Colorado, he pursued university studies in zoology, wildlife biology and animal science, which eventually propelled him back to Africa. As a doctoral student, he studied the ecology of nomadism in northern Kenya as part of the National Science Foundation-funded South Turkana Ecosystem Project.

After earning his doctorate in 1985, Coppock was employed as a scientist for the Ethiopian Rangelands Program at the International Livestock Center for Africa in Addis Ababa.

“That first job exposed me to major world events: famine, life in a socialist state and the subsequent toppling of a government,” he says. “The overall experience transformed me into a global citizen and the research molded me as an interdisciplinary rangeland scientist.”

After six years in Ethiopia, Coppock joined USU’s Department of Range Science in the College of Natural Resources.

“My initial research at USU involved work in the rangelands of Utah and Bolivia,” he says.

After a college re-organization in 2002, Coppock became a founding faculty member of the Department of Environment and Society. His research now focuses on problem-solving for people, including ranchers, pastoralists and small-holder farmers, who live in dry lands.

Coppock’s teaching assignments, where he’s developed a “deep fondness and respect for undergraduates,” have varied from range animal nutrition to world environment problems.

“Through the years, my academic focus has changed, but my interest in exotic places and the outdoors has persisted,” says Coppock, who participated in leading the successful, 12-year, U.S. Agency for International Development-funded Pastoral Risk Management project in eastern Africa with a consortium of partners from the United States, Ethiopia and Kenya. “I’ve shifted from basic to applied research, with a methodological shift from pure observation to stakeholder-driven participation with active, problem-solving components.”

Utah State, he says, has provided an ideal work environment to enable him to follow his professional passions.

“I’ve very grateful to mentors and colleagues at USU, who have given me the intellectual freedom to pursue a somewhat unusual career path,” Coppock says. “I especially appreciate the hard work performed by graduate students, post docs and other stakeholders for my projects, as well as the support and devotion provided by my family.” 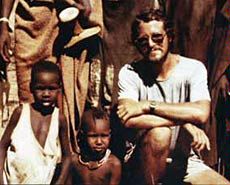 Coppock in 1981, with children of Turkana pastoralists, while conducting doctoral research in northwestern Kenya. The USU professor says his fascination with Africa began in childhood.