When Utah State University professor Robert Gillies took over the Utah Climate Center (UCC), the center was not recognized for its research in climate. Since becoming director of the UCC, Gillies has helped bring the center from a position of anonymity to one of national recognition by federal government agencies like NOAA.

“I went with my USU colleagues to Salt Lake City and gave a presentation to the legislature to obtain base funding for the center. This funding meant that the UCC has been able to set up an IT infrastructure of more than 70 weather stations located throughout the state to help famers and orchardists manage their agriculture,” said Gillies.

The data produced from these systems helps farmers increase productivity and management of their crops, such as preventing harm in situations like overnight freezing.

“They can now monitor when the temperature has reached a critical low point and assess the need to start the burners and fans in order to prevent freezing of fruit buds or flowers. In the past they didn’t have this timely information and were required to start and run the burners longer than was perhaps needed,” said Gillies.

It can cost up to $15,000 an hour to run the burners and fans. The systems implemented by the center have saved the famers from unnecessary hours running the burners and profit loss.

Gillies gave his Inaugural Lecture Series presentation March 27, the 13th and final lecture of this academic year’s installment. His lecture, “PHinally Done,” described the educational system in Scotland and his career path that led him to USU.

“Depending how well you performed on a test at age 11 in Scotland decided which tier and career path you pursued. I was fortunate to have been able to pursue a university path,” said Gillies.

Before coming to the United States, Gillies spent time in medical school, took a one-year sabbatical as president of the Glasgow University Athletic Club and also spent time serving in the Royal Navy.

“Opportunities came up and I took advantage of them every chance I could,” said Gillies.

After serving as a research associate at Pennsylvania State University, Gillies came to Logan, Utah, because of various prospects that USU offered as well, as well as the advantage of the outdoor opportunities.

Since taking the post as director of the Utah Climate Center at USU, Gillies’ research has been focused on climate diagnostics. His research team has discovered key findings in climate.

“The sea surface temperature in the western Pacific affects the northern Utah precipitation regime. Discovering the tropical correlations was an important step towards understanding the mechanisms that drive Utah’s precipitation regime,” said Gillies.

This discovery was instrumental in the ability to better understand the persistent inversions that plague northern Utah.

“The nasty inversions are also in part driven from the western Pacific,” said Gillies. “The most recent discovery has been that inversions are modulated by an oscillation in the north Atlantic that cause them to reset every six years.”

Gillies also recently published with his colleagues, a paper on the impact of the changing climate in Utah.

“In the paper we analyzed 50 or 60 years’ worth of climate data which show a decline in snowfall but a tendency towards an intensification of northern Utah’s precipitation that is increasingly coming in the form as rain.” said Gillies.

Gillies looks to continue to bring the Utah Climate Center into the national spotlight, and collaborate with other professors around USU.

“USU has a lot of really good scientists and there are many opportunities to collaborate with faculty in other disciplines to address the consequences of climate change both here in Utah, the USA and the world,” said Gillies. 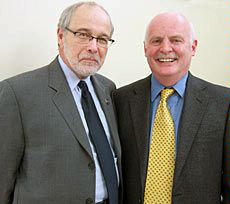 Professor Rober Gillies (right), director of the Utah Climate Center, presented the final Inaugural Professor Lecture of the academic year. He was joined by USU Provost Raymond T. Coward. The lecture series is coordinated by the Provost's Office.