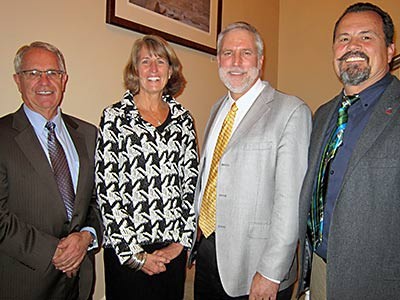 Dirk Vanderwall wasn’t one of those kids who grew up with dreams of becoming a veterinarian or a scientist, and certainly not a professor. His father, a Dutch immigrant, and mother, a direct descendant of members of the “Perfectionist” Oneida Community, raised Vanderwall in Oneida, New York, where the family operated a small dairy farm. So although a career in academe wasn’t the goal in his early years, the experiences on the farm and growing up in the agricultural heart of New York set Vanderwall on a path that eventually took him across the country five times during his education and career and landed him at Utah State University.

Vanderwall, head of the Department of Animal, Dairy and Veterinary Sciences and USU’s School of Veterinary Medicine, shared his story with guests at a recent celebration of his achieving the rank of professor. His Inaugural Professor lecture at the university president’s residence was titled “The (Not So) Long and (Very) Winding Road” because, he explained, reminiscing about his training and career makes him feel it hasn’t really been very long at all.

Vanderwall’s specialty in animal care and research is theriogenology. In other words, he’s a specialist in animal reproduction and has specifically built a career in equine reproduction. His research includes a search for methods to suppress the onset of estrus in horses and also examines declining fertility in horses as they age, which may also help explain parallel changes in aging women. While fertility and medicine are serious business, Vanderwall made a point of explaining that theriogenologists tend to be less grave and serious than their surgeon colleagues.

To illustrate the point, he choose as a visual aid a bottle opener designed to look like a sperm cell.

He told of some pivotal experiences that directed his zigzagging — both professionally and geographically — path. From age 15 though his high school years, Vanderwall worked on a farm that bred horses, standard breeds that were meant for trotting races. It was his first experience with horses and he saw veterinarians from a nearby clinic nearly every day as they came to the farm.

“I saw the A to Z of equine veterinary work,” Vanderwall said. “Those veterinarians weren’t just involved in the breeding work, they cared for sick and injured horses and directed care that kept them healthy.”

Even with those experiences, Vanderwall applied to college intending to study and pursue a career in agribusiness, not veterinary medicine. Even that part of his path wasn’t a direct, one-stop experience. He applied to Cornell, but was not accepted.

“Having grown up in New York, of course I thought studying agriculture meant going to Cornell,” he said. “But they were right not to admit me, and it was the right thing for me. I was an average student in high school, didn’t really study, and I wasn’t ready for the Ivy League world at Cornell.”

He attended the State University of New York-Cobleskill and his path took another turn in the first semester when he discovered a passion for biology and thinking like a scientist. He finished an associate’s degree there and, once again, applied to Cornell. This time he was accepted and earned his bachelor and doctor of veterinary medicine degrees there.

During vet school he did research with faculty member Gordon Woods, and got a taste of doing research and having it published.

“That’s where the connection became clear between faculty doing research and not just publishing it, but bringing it to the classroom,” Vanderwall said.

He didn’t know it then, but his path would intersect with Woods again later. Vanderwall had a private practice in large animal medicine and was resident veterinarian for a large horse farm in New York. He enjoyed the work, but kept feeling there was a next step he needed to take. His earlier experience with research spurred him on to pursue a Ph.D., and he moved to the University of Idaho where Woods was on faculty. It was a fortuitous move both professionally and personally, as it was there he met and married Allison Willoughby who finished her DVM degree just after he earned his doctorate.

A post doc position at the University of Kentucky took Vanderwall east for two years, then he headed west again to a non-tenured position at Colorado State University. He later returned to the University of Idaho and again worked with Woods, this time on a groundbreaking project that resulted in the birth of the world’s first cloned equine; a mule named Idaho Gem and his two genetically identical siblings, Utah Pioneer and Idaho Star. The Utah name for second of the mules honored the crucial role played by USU scientists, including Ken White, now dean of the College of Agriculture and Applied Sciences, and animal scientist, professor Tom Bunch.

It was an exciting, career-highlighting accomplishment and helped propel him east again to a position in the University of Pennsylvania’s School of Veterinary Medicine, where he served on faculty for three years. Then an opportunity to help develop and lead USU’s new School of Veterinary Medicine brought Vanderwall and his family west one more time.

Happily settled now in Cache Valley, Vanderwall said great faculty and students make being an administrator a gratifying addition to his research pursuits. He’s also a keen supporter of involving undergraduate and graduate students in research, setting others solidly on winding career paths of their own, like the mentors who once included him in their work. 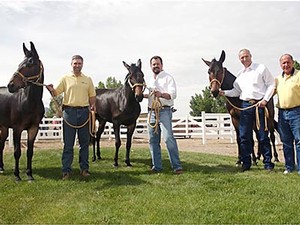 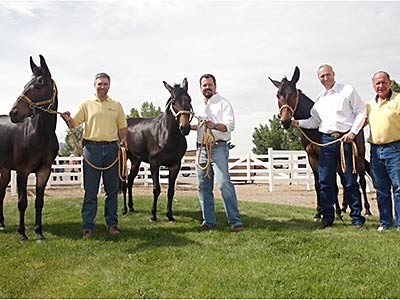