Anthony Peacock, a professor in the Political Science Department, gave his lecture “Take Off Eh! How I Came to Leave Canada and Teach at Utah State University” Monday, Feb. 13.

Peacock was born and raised in Canada. He spent some of high school in London, but finished in Quebec and Alberta. He completed a bachelor’s in philosophy at the University of Alberta, a master’s in political science at the University of Calgary, a law degree at Osgoode Hall Law School (York University) in Toronto, and a second master’s as well as a doctorate at the Claremont Graduate School in California. After law school, he practiced civil litigation for four years before moving to the United States.

His wife, Gretchen, also teaches at USU and the couple has three children.

Kathy Piercy is a professor of family, consumer, and human development. She presented her lecture, “A Professor of What?  Explaining my Career as a Social Worker/Scientist,” Wednesday, Feb. 8.

Piercy is a born and bred St. Louis native, and lived there until she was 23 years old. She left to pursue a graduate education in New Orleans. With a degree in social work, she moved to Greenville, S.C., to work at the Community Mental Health Center. It was in Greenville that she met and married her husband, Bill. She later opened her own practice, which she maintained for 12 years. She completed her doctoral degree at Virginia Tech in 1996, and then accepted a position at Utah State.

The Inaugural Lecture series is held to honor members of the USU faculty who have completed the promotion and tenure process and have been promoted to full professor in the last year.

USU President Stan L. Albrecht and his wife, Joyce, host the professor at their home with a reception in their honor before the lecture presentations. The series is coordinated by the Provost’s Office. 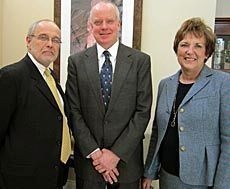 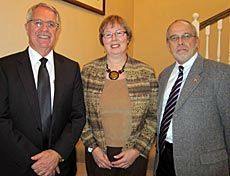