Utah State University librarian Cheryl Walters grew up surrounded by books. A house without books is not a house, to Walters.

Walters gave her Inaugural Lecture Series presentation Feb. 6, the seventh lecture of this academic year’s installment. Her lecture, “Life by the Book: Reflections of a Maturing Librarian,” described the influence of reading in her life.

“Books have served as an affirmation of my core values, thereby grounding me during tumultuous times. They have also opened me up to change, giving me new perspectives and new information,” said Walters.

“I wanted to do some kind of work that I enjoyed and felt was meaningful,” she said. “Libraries are so important in a democratic society and are vital to self-growth and learning.”

Before joining USU, Walters served as an assistant editor of a weekly naval base newspaper. She continued her pursuit of higher education and earned a master’s in library and information sciences at the University of South Florida while working full time in the university library.

“I could take classes for free because I was a university employee. Even better, I could use my work situation to support my studies by basing some of my school projects on work I was doing at the time,” said Walters.

After working at University of Central Florida in her first professional librarian position, Walters moved to Utah seeking a safer, more family friendly environment for raising her daughters. Adapting to Utah and USU took several years, but she eventually found USU a welcoming and thriving environment.

“The library culture here is very friendly, collaborative, positive and open to innovation,” she said. “Other librarians in Utah have told me how much they wish they worked at USU because we have such a great working environment, collegial staff and seem to have so much fun.”

Walters was the first in the profession to integrate thermal transfer printing technology with integrated library systems for improved spine label printing.

Walters became a librarian in the 1980s and has watched technology change librarianship into a much more dynamic and challenging profession.

“Today’s librarians need to be very computer literate,” she said. “They need to be agile and proactive early adaptors of technology, ready to meet user needs in the constantly changing world of information.”

Walters’ experience allows her to be a mentor to other librarians.

“I look forward to working with younger librarians entering the profession to give them a good start,” said Walters. 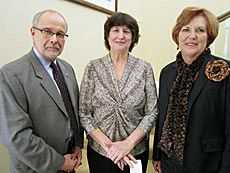