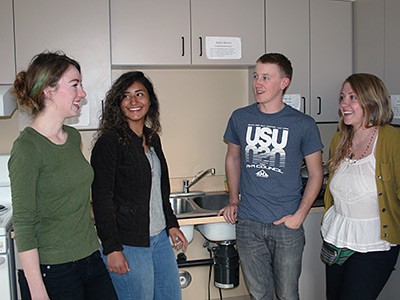 Nothing like spirited competition to rally folks around a cause and that’s exactly what a team of Aggies are banking on to raise awareness of the need to conserve one of Utah’s scarcest resources: water.

“Utah is the second driest state in the nation, yet one of the highest in per capita water consumption,” says Utah State University landscape architecture student Chris Creasey. “It’s a strange paradox. We need to build awareness and change behaviors.”

With fellow residents in EcoHouse, a themed-housing option in USU’s Living Learning Community, Creasey is taking shorter showers, filling reusable water bottles and using leftover water on plants, rather than throwing it down the drain.

The students are participants in “Water Wars,” a campus-wide event aimed at determining which of USU’s 16 singles housing dormitory facilities can reduce their water consumption the most during the month of March.

As the first university in Utah to sign the American College and University Presidents Climate Commitment, USU was already taking steps to promote sustainability and conservation on campus before the competition began says Gary Phillips, area coordinator for USU Housing’s Student Living Center.

“We’ve been working with USU’s Sustainability Office on a number of projects and have planned a similar competition called ‘Energy Wars’ for fall 2015,” Phillips says. “When we heard the university had designated 2015 as the ‘Year of Water,’ we decided to organize ‘Water Wars.’”

He teamed with student sustainability officer Darren Bingham and Brian Greene of USU Water Quality Extension, along with other students, faculty and staff, to organize the competition.

“Small changes in water use behavior can make a big difference,” says Greene, who serves as coordinator of the statewide Utah Water Watch. “That’s an idea we want to get across with ‘Water Wars.’ Saving water isn’t a hardship.”

“It’s about getting yourself in the habit, so conserving is second nature,” says Judd, a conservation and restoration ecology major.

“Not leaving the water on while you’re brushing your teeth, being conscious of your water use throughout the day,” adds roommate and biology major Holly Flann. “Eating less meat is also a way to conserve water. That doesn’t mean everyone has to become a vegetarian, but you can practice ‘Meatless Monday’ and still have a positive impact on water conservation.”

“We live in a desert,” says fellow EcoHouse resident and environmental studies major Kendra Stanger. “We’ve gotten used to living a certain way — having green lawns — but there are other ways to live that are more sustainable and just as aesthetically pleasing.”

Phillips says Aggie students are eager to promote conservation and contribute to their communities.

“Efforts like ‘Water Wars’ give our students a chance to get involved and build habits they’ll keep well beyond their college years,” he says. “We’re fostering responsible citizens who’ll guide the future of our state.”

At the end of the competition, Phillips and colleagues will compare the month’s water usage records with those of last year. The winning dorm will receive — what else? — an outdoor, water recreation party.

“We’ll likely have a dunking booth and perhaps a slip-and-slide on Old Main Hill,” he says. “We’ll be able to point out: ‘You saved a significant amount of water. Now you can enjoy cool fun on a hot day.’” 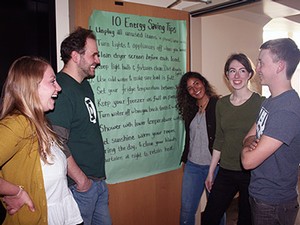 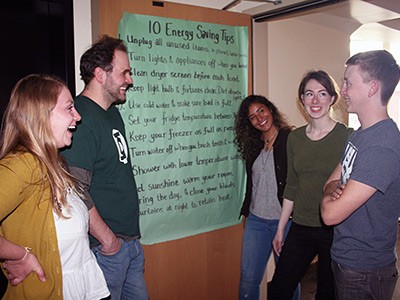