Utah State University scientists conducting field research throughout the state this summer are sweating through searing heat. On the other hand, USU geologist Kirsten Bahr, whose work takes her to northern Utah’s Logan Canyon, faces the ominous prospect of hypothermia.

That’s because Bahr, a Benchmark Scholar in USU’s Department of Geology, descends hundreds of feet into cold, dark caves within the Bear River Range.

“The temperature inside caves is about the same as the average surface temperature of the area in which the caves are located,” the master’s student says. “In the Tony Grove area, where I’m working, temperatures inside the caves approach near-freezing.”

The Bear River Mountains, which extend from Hyrum, Utah, at the southern tip northward to Soda Springs, Idaho, consist mostly of the carbonates limestone and dolomite.

“Millions of years ago, the Bear River Range was a shallow sea,” Bahr says. “Over time, carbonates were laid down and later became rock. Thousands of years later, the rock was uplifted and folded into the mountains we see today.”

The mountains enclosing Logan Canyon may appear solid, she says, but water from rain and snowmelt has gradually carved out hundreds of tunnels within the rock.

“Inside, the mountains are like a giant sprinkler system filled with a network of pipes. Those buried conduits carry water and, where they reach the surface, form springs.”

“Water is always the big picture in karsts,” Bahr says. “As we study caves, we’re asking ‘How did these passages form?’”

Tectonics breaks rocks and water, which takes the path of least resistance, enters those fractures. Since water dissolves carbonates it will, over time, enlarge the fracture. But if a fracture isn’t present, water will still come in contact with rock and again, over time, dissolve rock and form karst features.

Earlier in the summer, the geologist conducted dye tracing to determine where the water starts and ends in the karsted area.

“We have a short window of time to get this work done,” she says. “Tony Grove is covered in snow for most of the year.”

Bahr injected fluorescein, a powdered, non-toxic dye that turns Day-Glo green in water, into streams that disappear into sinkholes. She later observed the dye collected by small charcoal bags at Wood Camp Hollow Spring. Most of Tony Grove’s groundwater flows through underground channels to the spring, which is near the Logan River.

“This process tells us where the water starts and where it ends, but nothing about what happens in between,” Bahr says.

The next step in summer research is structural mapping of selected caves in the area, including the more than two-mile long Main Drain Cave. As the name implies, it’s one of the main conduits for rain and snowmelt draining from Tony Grove into Wood Camp Hollow. Nearly 1,300 feet deep, it’s thought to be the deepest cave in Utah.

To prepare for caving and underground data collection, the geologist dons a protective cave suit, nearly 40 pounds of climbing and safety gear, along with her geologic instruments.

“Yes, you need to be in good physical condition but it’s really about preparation, the proper equipment, technique and the right mindset,” she says. “You have to know what you’re getting into.”

Staying as dry as possible is a must, as well as taking precautions to avoid injuries. The inside of the caves are wet and slippery, with jagged rock. Care must be taken to avoid shearing climbing ropes on sharp ledges.

“If you get hurt and can’t get yourself out, you’re at high risk of developing hypothermia,” Bahr says. “That’s one reason we never go caving with less than three people.”

Included in Bahr’s safety gear? A large plastic garbage bag and a candle.

“It’s low tech, but it’s a way to stay warm,” she says. “Simply poke a hole in the bag, slip it over your head like a poncho and light the candle.”

Within the caves, Bahr measures “strike and dip” of the fractured walls, along with the bends and turns of passages, using a Brunton compass, an inclinometer and a laser rangefinder.

“Back in the lab, I’ll enter the collected data into computer models to examine what’s controlling the caves’ passages,” she says.

The Draper, Utah native began her undergraduate career as a collegiate softball player with an eye on forensics.

“I like solving puzzles and trying to figure things out,” says the 2006 Jordan High School graduate. “I tried a geology class and really liked it. Caving has become a passion.”

Bahr admits her parents are concerned about the safety of her research pursuits, but she reminds them of her training.

“I was taught the right precautions and I’m continually learning from other cavers how to be prepared and safely perform this work.” 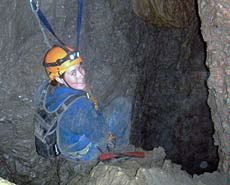 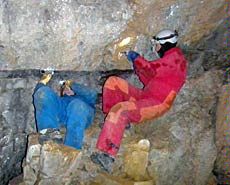