With the completion of the second of two volumes of the Manual of Grasses for North America, Utah State University’s Intermountain Herbarium celebrates the culmination of 20 years of painstaking field research and documentation.
Published by Oxford University Press, Volume 24 of the Flora of North America series recently rolled off the press to join its companion Volume 25, also edited at USU and published by OUP, in 2003.
“We borrowed the 2002 Winter Olympics motto – ‘Faster, Higher, Stronger’ – in our efforts to bring these publications to fruition,” says Mary Barkworth, director of the herbarium and associate professor in the College of Science’s Biology Department.
And indeed the two volumes, which catalog all grasses of North America north of Mexico, live up to the challenge. The exhaustive tomes, 911 pages and 783 pages respectively, feature cross-referenced descriptions, keys, illustrations and GIS-generated maps of hundreds of species.
Until now, botanists studying North American flora relied on the antiquated Hitchcock’s Manual of Grasses of the United States for their research. First published in 1931, the manual was “a phenomenal resource for its day,” says Barkworth.
“Everyone loved the layout, illustrations and reference keys so we adopted a modified version of it for the new volumes,” she says.
But Hitchcock’s manual was based heavily upon data collected in the 1800s, says Barkworth, so “basically, [it was] teaching 19th century ideas.”
Burgeoning developments in plant genetics and DNA testing in the past few decades have caused scientists to rethink grass classification and a new, primary reference is long overdue, she says.
The new volumes – divided into two parts due to the sheer size of their content – reflect the efforts of more than 80 plant taxonomists from the United States and beyond, as well as several illustrators. The project was headed by Barkworth, who was assisted by USU team members Kathleen Capels, Sandy Long, Michael Piep and Laurel Anderton.
“Their contributions were critical,” says Barkworth. “Each brought different skills to the project, all of which were important.”
Barkworth also praises the contribution of Chris Garrard, a research associate in USU’s Remote Sensing/Geographic Information Systems Laboratory. While a graduate student in biology, Garrard wrote a program to produce species distribution maps for the volumes.
“Absent Chris, I don’t know what we would have done with the maps,” says Barkworth, who explained that as data was updated maps had to be regenerated – a time-consuming and difficult task prior to Garrard’s program.
Funding for the project came from a mélange of sources, including the U.S. Department of Agriculture, the U.S. Department of the Interior, individuals and private foundations, as well as the Utah Agricultural Experiment Station and USU.
Future plans include production of a streamlined version of information from both volumes for field and classroom use, along with an online version “that’s like having a herbarium in your office,” says Barkworth.
The volumes provide a common starting ground for scientists, she says, with consistent information about the morphology, variability and distribution of grasses.
“Even if scientists disagree about the appropriate name for a plant, the volumes provide them with a common starting point for discussion,” says Barkworth.
Located in an inconspicuous basement office in the Junction student cafeteria on USU’s Logan campus, the Intermountain Herbarium is a major regional herbarium. The facility houses more than 244,000 specimens and is a significant contributor to the Global Biodiversity Information Facility.
In addition to serving researchers, the herbarium offers weekday public access, public workshops and Web resources for all ages. The herbarium’s “Fun Facts About Fungi” Web page, developed by Adjunct Biology Professor Robert Fogel for elementary and secondary school students, was recently designated a “ClickSchooling Award Winner.”
“We need to get more people fascinated with plants and fungi,” says Barkworth.
Related Links
Contact: Mary Barkworth [mary@biology.usu.edu], 435-797-1584
Writer: Mary-Ann Muffoletto [maryann.muffoletto@usu.edu], 435-797-1429 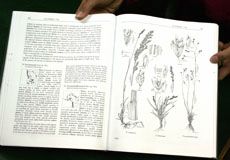