By Rhett Wilkinson in The Utah Statesman, Friday, April 29, 2011

This is the second of the two part story about the impact of the Quran burning and the Muslum community here in Logan, Utah.

In the fall of 2007, engineering major Allia Abu-Ramaileh left her two Muslim parents, one, a father with an Islam tradition that dates back centuries; the other, an American of 32 years, and her hometown of Bountiful, Utah, for USU. Her first semester here, after receiving the highest quiz score in a calculus class that included just one other female, the negative remarks began to be directed her way.

"Because I got a higher score than anyone else among those who thought I was ditzy and not so serious, they were surprised," she said. "I was a bit offended by that."

But she said she may have had an idea about where at least some of those snickers were coming from.

Horrific events related to radical, fundamentalist Islam terrorist organizations have occurred since the turn of the century.

Yet despite the reported putrefaction at a national level, Abu-Ramaileh and several others of the faith said they have not sensed the sentiment as strongly at USU.

"As a Muslim student, living in Logan and attending USU, even though I grew up my entire life in a Muslim country, I still feel really comfortable with the kind and respectful people here in Logan," wrote the engineering major. "I am amazed at the similarities between Islam and the LDS faith. The conservative environment here in Utah makes me feel close to home. I can say that I (have) never (been) treated badly here because of my religion."

Abdallah said conflicts and tension between his and other faiths arise in the defense of a gift that all seek.

"Freedom is not limitless," he said. "There must be some limits for our freedom when it comes to the others' rights, such as the rights to live and to worship God. Can I kill my neighbor just because I have freedom?'"

Abdallah said peace is afforded as individuals openly discuss their beliefs with one another.

"Some would hesitate to talk about other religions or even historical events," he said, "so why would freedom be limitless when it comes to Islam? In this case, the freedom would be discussing any topic in Islam or the Quran in a respectful way, but not through burning the Quran as a way to disrespect and intentionally offend others."

Bedri Cetiner, a USU electrical and computer engineering associate professor, also said he has felt the welcoming arms of the valley.

"USU is presenting a wonderful environment for me as a Muslim," Cetiner said. "I have never encountered any prejudice whatsoever."

Cetiner said he participates in an interfaith group consisting of faculty with various religious backgrounds. It's a group that the man of Turkish descent, who can trace his Islamic roots on both parents' side back to 10th century, said he is grateful to be involved with.

"Some of my best friends are among these guys, who are not Muslims," he said. "We meet every other week and have great discussions on various topics, which are enlightening, fruitful and fun."

Among those friends is Nick Eastmond, a department faculty member of instructional technology and learning sciences in the College of Education. Eastmond received firsthand experience in living with Muslims, including in the home of separate families, during two of his teenage years, while Eastmond's father worked overseas. Eastmond and his family lived in Nigeria during the 1963-64 school year, followed by a stay in Zaria as he attended college there during the following academic year.

They were years of experience that have left the instructor to say that he has sought ways to praise the faith ever since.

"They are a faith that is worldwide, and they are very influential and have contributed a lot to our civilization," he said. "A lot of our mathematics and astronomy and history of ideas came through Islam. When the Europeans were stagnating, the Muslims were booming and carried the classical Greek writings forward. The West had to go learn these things from them. Then, the Renaissance started to take off."

History aside, a paradox remains for the globe-trotter.

"There are some really tough things here," Eastmond said. "I couldn't believe why they could burn the Quran, but I couldn't believe that there would be this response on the other side of the world. I have a really favorable impression of the Muslims, and so it's just interesting to see how this is playing out," he said.

Eastmond said he has enjoyed being able to see the comparisons between that of Islam and his own.

"In real terms, they are a very impressive religious group, they have devoted followers, are very much committed to their values and are incredibly congruent with the values we have in the (LDS) Church," he said.

The same year Abu-Ramileh faced criticism as a woman in a male-dominated major at USU, she made the decision to dedicate herself to a higher Islam standard of modesty by donning the head-covering article of clothing. It was a decision that silenced the critics — whether or not that muting came out of the critics' respect for Abu-Ramaileh's religious convictions, or out of a fear or misunderstanding for the faith she was now clearly representing.

The criticism for being a minority in yet another way was quelled, she said.

"After I wore the scarf, people were not surprised to see I got these awards or did well on a test," she said. "I was taken more serious as to why I had success. Students believed I could succeed as a women in engineering. There was no more making fun of me not being able to get as high a score on a test."

Abu-Ramaileh said while the bit of clothing — and the deep religious ties that run within its lining — means much more to her than avoiding a few snickers on a base-level calculus course, arriving at such a conviction hasn't been easy.

She said in high school it was harder for her to wear the scarf because of the maturity level of her peers. She said in college, people are more accepting. She said the scarf has become a part of embracing her faith.

Not that she, nor Abdallah, Cetiner or any of their comrades, mind taking a break to answer any questions.

"I have always tried to give people the benefit of the doubt when they ask something, that to some may be offensive, but to me, I just look at it as a learning and sharing opportunity," she said. "Many times people are just curious or want to learn about Islam and their questions are innocent."

Abu-Ramaileh recognizes that openly speaking to others may be revolutionary to some.

"Here in Logan, many people have come up and asked ‘Oh, your husband allows you to come speak in public?' — things to that effect," she said.

Abu-Ramaileh said such misunderstandings are a battle she faces continuously.

"I hate to see these big events tied to our religion," she said of the public's association of radical terrorism with the mainstream faith. "The only way to cage the rumor perspectives, is just meeting Muslims. Then, you won't tie all the others to TV, or if you do have those crazy ideas in your mind, then you see a normal Muslim in the mainstream, and you'll have at least a new perspective." 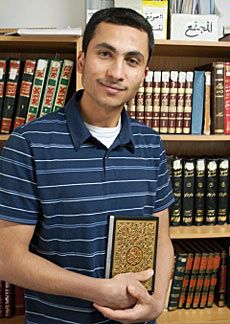 Adel Abdallah has been a Muslim his whole life, and he said he doesn't mind answering questions others have of his faith. Breck Byington photo from the Utah Statesman Online.