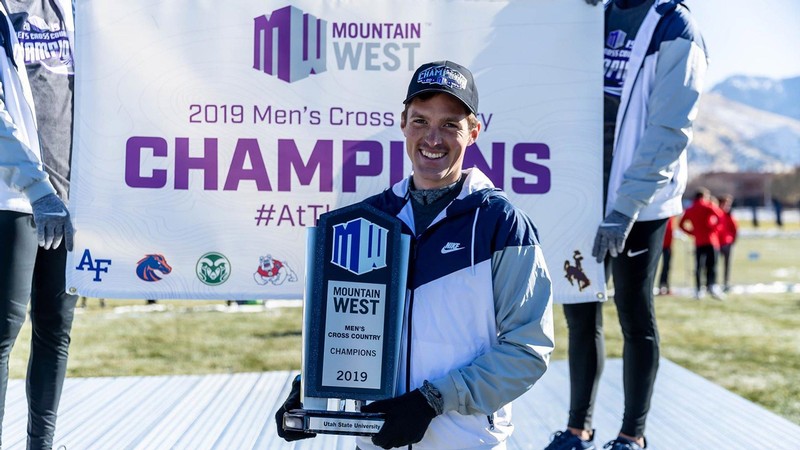 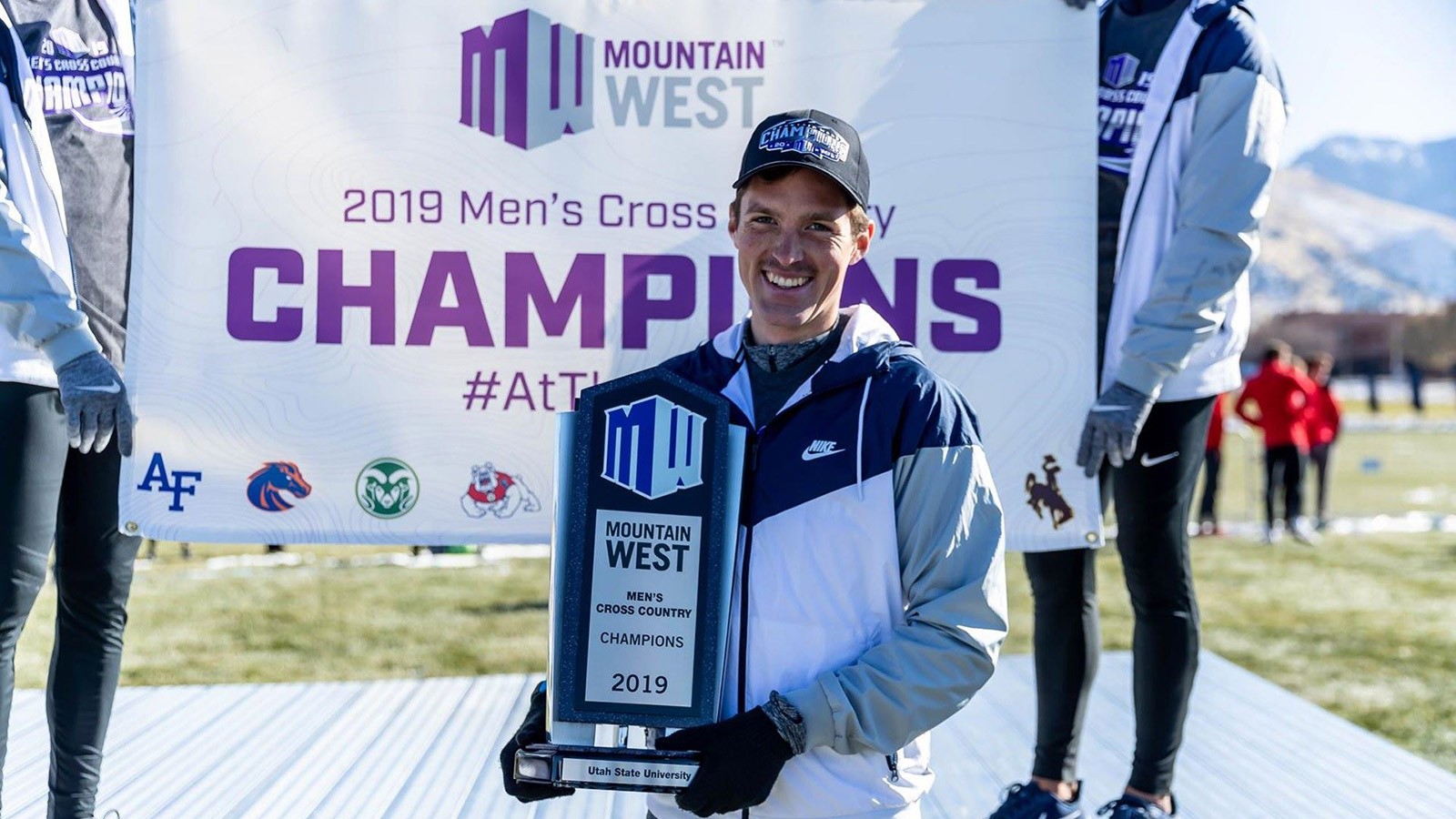 Prior to the start of the 2019 cross country season, James Withers and the rest of his teammates on the Utah State men's team set a few goals.

Check, check and check. For Withers, not a bad way to end his athletic career at Utah State.

"I am grateful for my coaches, my teammates and my wife (Kimille) for their support in my athletic career," Withers said. "I will forever cherish the friendships I developed these past four years as a student-athlete. What I will remember most about Utah State is the people. My teammates mean so much to me. I love all of them. I enjoyed training with them, competing with them and traveling with them. Some of my fondest memories at USU are the times I spent with the team. My coaches were incredible and I will forever be indebted to them for the life lessons they taught me."

"He was always willing to sacrifice so much and after sacrificing, would continue to ask what more he could do to help the team," said USU assistant distance coach Sarah Griggs. "All of that culminated this cross country season when James really stepped it up and left it all out there. Nothing was going to stop him and the rest of the team from achieving their goal to go to NCAA's. Like any athlete, James has had his fair share of ups and downs. Watching him grow, mature and overcome setbacks has been very rewarding as a coach.

Withers was a big reason why Utah State captured its first-ever Mountain West title. Three of the top six runners in the men's 8-kilometer race were Aggies as Luke Beattie (23:23.8) and Withers (23:24.9), both seniors, finished fifth and sixth, respectively. Withers and Beattie, along with graduate student Dallin Farnsworth, who won the individual title, earned first-team all-MW honors.

"Conference this past year is what I will remember most about James," said USU head cross country coach Artie Gulden. "He tended to not perform well at conference meets because he would put so much pressure on himself. But, to see him rise up and earn first-team all-conference in his last Mountain West meet was really inspiring and gratifying. He worked so hard and wanted it so badly, so to achieve the recognition in his last opportunity was wonderful."

The Aggies, who came into the championship meet picked second in the conference, finished 32 points ahead of second-place Colorado State (74 points).

"After running at Wisconsin, two weeks before conference, I got sick," Withers said. "After recovering, my wife was admitted to the hospital two days before conference. At the time, my entire focus was on her and caring for my kids. I was not even sure if I was going to run conference. However, my wife encouraged me to still race. It was by far the best race of my running career.

"I felt strong throughout the race and accomplished my goal to place in the top seven. Although not every athlete on the team had their best race that day, overall, we ran strong and raced as a team. Our coach gave us a race plan and we followed it to perfection. I will forever cherish the memories of winning the conference title as a team. Placing five in the top 25 at regionals was also a proud moment for the team."

Withers, who did not have any eligibility left for the 2020 indoor and outdoor track & field seasons, made his senior season debut at the Montana State Cross Country Classic, where he finished first among Aggie competitors, and third overall, with a time of 24:50.2. He then helped lead Utah State to its third-straight team title at the Paul Short Run, placing 17th with a time of 23:50.6.

In 2017, Withers and the Aggies earned an at-large bid to the NCAA National Cross Country Championships, marking the first time in school history they had ever sent a full team to the final meet of the season.

Ranked No. 27 in the nation going into the championships, the Aggies finished 27th with 603 points – despite having three runners go down early in the 10k race – at E.P. "Tom" Sawyer State Park in Louisville, Ky. Withers placed 149th with a time of 31:07.14.

"Our team relied heavily on Dillon Maggard to qualify for NCAA's in 2017," Withers said. "However, it was still a team effort. The following year, we did not have Dillon and had to prove to the nation that we could do it without him. Unfortunately, many of us had a rough season, competing at a subpar level.

Withers was also a key member of Utah State's distance squad during the indoor and outdoor track & field seasons.

The native of Blackfoot, Idaho, ranks fourth all-time in Utah State indoor history in the 5,000 meters with a time of 14:19.61.

"James has been wonderful for the program," Gulden said. "He was willing to work hard all the time, he supported his teammates and competed hard. He's a huge reason for the growth of our distance program."

Off the field of competition, Withers was an eight-time academic all-MW honoree and four-time USU Joe E. and Elma Whitesides recipient. He also was named a MW Scholar-Athlete following the 2016 track & field season.

"James was the master at multi-tasking and took his academics very seriously, so seriously that whenever we were on the road and at restaurants grabbing dinner, James would have some textbook propped up on the table and his calculator out vigorously doing homework," Griggs said. "Somehow, though, he still stayed engaged in the conversation at the table."

The son of Mark and Camille Withers graduated from Utah State this spring with a bachelor's degree in human biology and minor in chemistry. He knows he wouldn't be where he is today without the support of his wife.

"My wife was very supportive," he said. "She cheered me on throughout the entire journey. I owe my success to her. On top of her schooling and work, she was with the children during all of my practices, all of my classes, all of my competitions and all of the team meetings. She helped me get to bed on time and arise early, as well. She is the main reason I did not quit. I could not have done it without her. For every athletic and academic accomplishment I earned, she deserves just as much credit as me because of all of the hard work she put in."

Withers, who enjoys hiking and mountain biking, and his wife are the proud parents of two sons, Tanner (almost 3) and Dallin (almost 1).

Prior to making his way to Utah State, Withers was dead set on attending BYU-Idaho in Rexburg, Idaho, which dropped athletics following the 2000-01 season. However, a conversion with one of his fellow missionaries serving a mission for The Church of Jesus Christ of Latter-day Saints in Australia set Withers on a different course.

"He was an athlete at UVU and he told me all about his experience in cross country and track," Withers recalled. "I had a deep love for running and always felt like I was making a mistake planning on going to BYU-Idaho. After hearing about his experience, I decided to email a few coaches about running in college. When I returned home, I investigated the pros and cons of each school in Utah. After much thought over the matter, I chose USU because of the cost, the team and the academic programs."

That decision to become an Aggie certainly paid off, not only for Withers, but the cross country and track & field teams.

"We will miss him so very much," Gulden said. "We have to thank his wife, Kimille, who is an absolute angel. She was always supportive of him and willing to sacrifice things in their family to help James with his running. It was wonderful that she and their youngest son were able to be at the NCAA Championships with him and share in that experience, because Kimille deserved it as much as anyone."

Withers is now in the process of applying for medical school, which he plans to start in the fall of 2021. He is interested in a career in orthopedic surgery. 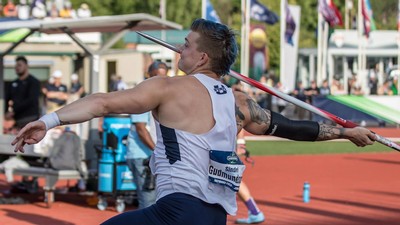 Jordan Love took a big step towards "household name" status on April 23 when he selected by the Green Bay Packers with the 26th pick of the first round of the NFL Draft.