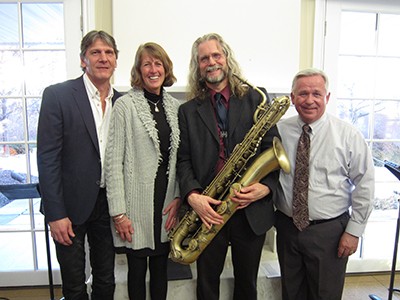 Jon Gudmundson, director of jazz studies in the Utah State University Caine College of the Arts, delivered an inaugural lecture on February 13 entitled “The Road was Long with Many a Winding Turn.”

Gudmundson grew up in Bellingham, Wash., where he happily began participating in every musical ensemble the public school system had to offer. His academic career path was long and winding, beginning at Western Washington University where after one quarter, he dropped out to perform with a band in Seattle. Life threw him some curveballs and he took some time off, wandering the world and performing. He finally returned to Western Washington University to obtain a bachelor’s of saxophone performance and jazz studies. Even then, Gudmundson still found himself taking several “incompletes” on his courses to tour with bands and play on a cruise ship.

Gudmundson went on to study with David Baker at Indiana University where he obtained a master’s degree in jazz studies and met his wife-to-be, Maureen. Next on the list was a doctorate in music from the University of Northern Colorado.

Gudmundson’s first full time teaching job was director of jazz studies and professor of saxophone at Brevard College in North Carolina, where, among other things, he was honored with the college’s Teacher of the Year award.

In 2003, Gudmundson joined the faculty at USU and took over the jazz area from professor emeritus, Larry Smith, who Gudmundson calls one of the finest human beings he has ever met.

Over his time at USU, Gudmundson has published a few papers, given several hundred performances and clinics all in 50 states and dozens of countries and recorded several CDs, including two with the USU Jazz Orchestra and Caine Jazz Combo. He is a founding member of the faculty ensemble Aggie Music Project and his jazz saxophone quartet, FOUR, has recorded several albums and performed all over the world.

Gudmundson was honored as the Caine College of the Arts’ Teacher of the Year in 2016, which reflects his great love of working with the wonderful music students at USU.