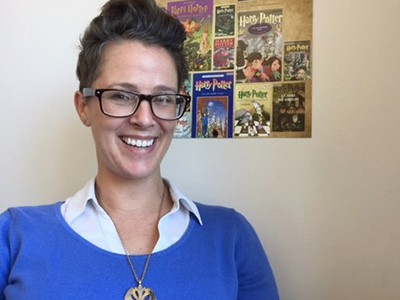 Does adulthood have to spoil everything? These days, it seems, even the superheroes and pop-culture icons we loved as children are now a bit politically incorrect. Sexist? Even racist?

There’s that whole Super/Iron/Bat/Spider/Ant “man” thing. And “The Beauty and the Beast?” Well, “it has some serious problems,” says Debra Jenson, an assistant professor of Journalism and Communication.

Jenson will moderate a panel discussing this dilemma — “Is your Favorite Problematic?” — at this weekend’s Comic Con FanX in Salt Lake City.

Jenson’s own answer to this question of whether it’s politically correct to love flawed character is a resounded “yes,” as long as we’re aware of pitfalls.

Jenson is a member of the programming committee for the bi-annual event. The busier, flasher Comic Con convention in the fall celebrates all aspects of popular culture. The shorter, smaller FanX, on the other hand, is more of a fan experience “that brings in niche folks” and allows for more intimate discussions. Basically, it’s just geekier, says Jenson, who is herself a proud geek and mother of young geeks,

Jenson will moderate two discussions featuring panels of experts and fans. Both will be held in room 151G of the Salt Palace.

Friday at 7 p.m.: “A Critical Reading of ‘The Witch’ — Exploring Feminist Themes”

The discussion will focus on the feminist takeaways of this 2016 horror film set in a 17th-century Puritan household.

Saturday at 4 p.m.: “Your Favorite is Problematic”

This panel topic was Jenson’s suggestion after a friend mentioned she had sat down recently to watch “Sixteen Candles” with her own children. She, like Jenson, had loved the 1984 film as a teenager; now, as an adult she was appalled at the film’s sexism and racism. (Do you recall the foreign exchange student named Long Duk Dong?)

“We’re going  to discuss the way that the things we love fall short in the way they perpetuate stereotypes,” said Jenson. “We’re going to talk about what happens when we discover those things — and if we’re allowed to still like our favorite icons.”

This isn’t a new topic for Jenson, who studies the representation of marginalized groups in popular culture. Last fall, she was among the TEDxUSU lineup, speaking on the increasing diversity of our superheroes in a speech titled, “The Comic Universe Belongs to Everyone.”

The Saturday FanX panel will allow each member to share (and justify) their guilty pleasures. “It will be a semi-academic, semi-confessional thing,” Jenson said.

“The idea is, do we just toss away anything that we used to love once we realize it’s got problems?” she said. “I don’t think it’s helpful for us to just say, ‘Comic books objectify women and give men unreasonable expectation for strength and control, so we should just never look at them again’.”

Jenson herself will admit to becoming increasingly disappointed with her beloved Harry Potter series. Like other media, “we like it on a surface level. We think ‘Oh, this is fun,’” Jenson said. “And then we dig deeper.”

Have you ever flinched, for instance, when “Harry gets sent back to abusive situations time and again by people he trusts”?

If this is a concern heard more frequently these days, Jenson attributes it to our newfound ability to interact with our media rather than be mere media consumers. Plus, she adds, “maybe some of us are getting better at watching it and talking about it.”

So, watch away. You’ll find only understanding on Jenson’s part. But, she adds, just keep the conversation going. And keep talking about tough issues with your children.

“We should be asking ourselves, ‘What are our children learning from the media they’re watching now?’” she said. “The Harry Potter generation is now watching ‘The Walking Dead’, ‘Westworld,’ ‘Game of Thrones’. Now what are they learning?”

Related Links:
Schedule of all FanX panels and events